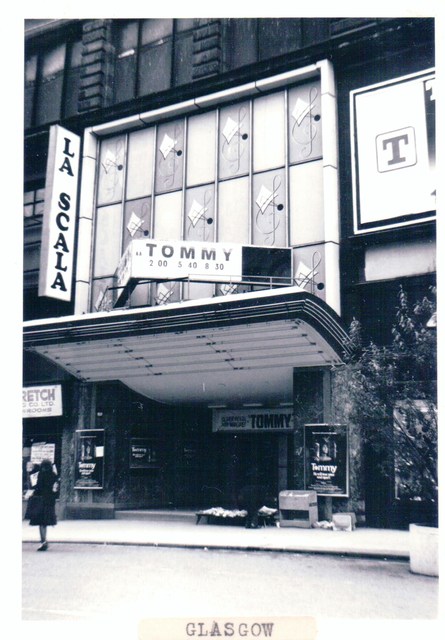 The La Scala Cinema was opened on 17th October 1912 by Glasgow Photo Playhouse Ltd. It was located within an old warehouse building and was designed by architects Neil Campbell Duff & James McKissack. It had a rectangular auditorium which contained 1,000 seats located in stalls, and a balcony that had side slips supported on pillars.

In 1928 a Christie 2Manual/8Ranks theatre organ was installed, becoming the first cinema in Scotland to install an instrument by this manufacturer. It was opened by organist Edward O'Henry. In August 1936 the interior was given a complete renovation by architect Alister G. MacDonald and the auditorium now had an up-to-date zig-zag Art Deco style and an enlarged seating capacity of 1,300.

In 1976, the auditorium was divided into two screens seating 650 and 250. Two years later in 1978 the former café was converted into a third screen seating 110.

Re-named the Scala Film Centre in 1981 it closed on 28th May 1984 with "Police Academy", "Night Moves" and "Risky Business". The auditorium was demolished, but the front section of the building remains and went over to retail use as a Mark One clothing shop, which today has become a Waterstones Bookshop.

Thanks to Ken Roe for adding this theater to this website today. For a vintage photo of the auditorium facing stage, after redesigned described above with an Art Deco makeover, scroll down to page 14,
View link

The Christie organ in the La Scala was a 2/8.

I have visited it a few times over the years .Seeing Gregors Girl There and Quadophenia .

From 1954 to 1958, La Scala was the Glasgow home of 20th Century Fox CinemaScope films. This followed Fox and Rank falling out over the cost of ‘Scope installations and extended runs and the creation of the Fox (or Fourth)circuit.