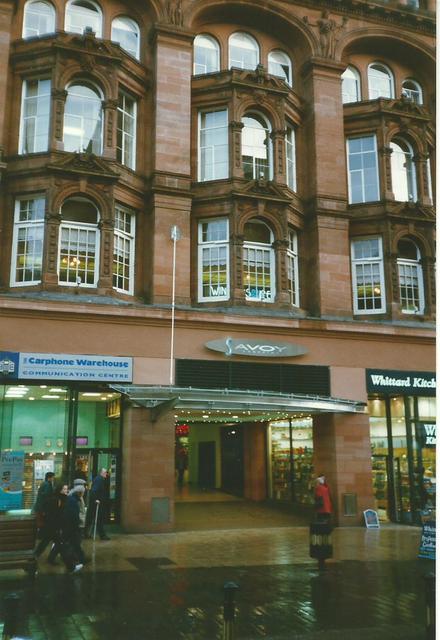 The Picture House opened on 19th December 1910 and was a project of Provincial Cinematograph Theatres(PCT). Constructed behind an existing facade which was built in 1895 and designed by H.&D. Barclay in a free Classical style. The architects for the interior were PCT’s in-house architects Naylor & Sale. There was an elaborately decorated Palm Court foyer, which had a large fountain feature in the centre which contained goldfish swimming at its base and there were also birds in cages amid the palm trees and marble pillars. Inside the auditorium seating was provided for 1,084 in stalls and circle. It was reconstructed in December 1912, again to the designs of Naylor & Sale with seating increased to 1,140. The Glasgow firm of interior decorators; Guthrie & Wells were responsible for the striking mouldings and columns. The centre-piece was a plaster moulded panel of a Roman charioteer and horses over the proscenium.

Architect Percy L. Browne was brought in to alter the foyer and do further reconstruction on the cinema in 1925 with a new increased seating capacity for 1,600. From 8th October 1925, a Wurlitzer 2Manual/8Rank organ was installed. The Picture House also had a cafe for the conveience of its patrons. In February 1929, PCT were taken over by the Gaumont British Theatres Ltd. circuit and the Picture House was eventually re-named Gaumont in June 1947.

It began playing roadshow presentations, beginning with "The Ten Commandments" for a four month run and followed by an eighteen month run of "South Pacific". In 1960 the auditorium was modernised and on 16th April 1965 "The Sound of Music" began a long run which ended on 23rd December 1967. This was followed by another Julie Andrews film "Thoroughly Modern Millie".

The Gaumont closed on 15th January 1972 with Sid James in "Carry On At Your Convenience" and demolition began almost immediately. The auditorium was destroyed by fire on 20th March 1972 and the facade was retained. Also destroyed by the same fire when undergoing demolition was the adjacent former Savoy Picture House (another Gaumont operated cinema). The sites of both cinemas now hosts the Savoy Shopping Centre and Savoy Tower office block.

The retained facade of the Picture House/Gaumont was designated a Grade B Listed building on 15th December 1970.