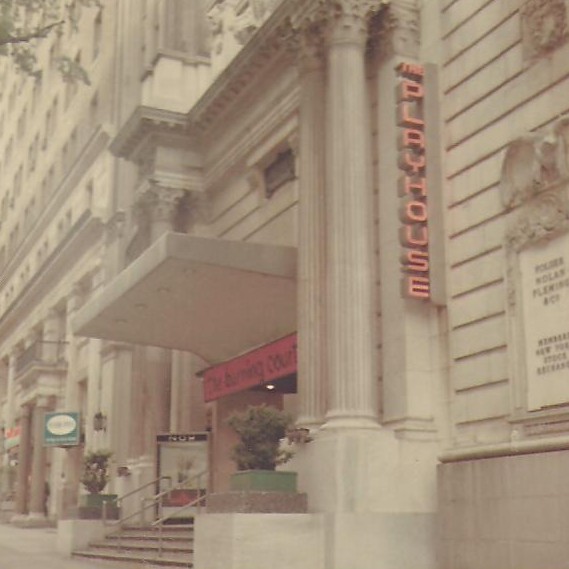 In 1908, this Neo-Classic style building opened in downtown Washington D.C. as a brokerage house on 15th Street south of H Street and near the White House’s Lafayette Park. Paul Pelz was the architect of the building. It later became a restaurant.

The Playhouse opened on April 27, 1948, with the movie “The Search”. The opening was attended by Washington notables including Mrs. Truman and Margaret Truman. Simon Zelnik and Milton Kirchman were the theatre architects. Dove gray and coral were the interior colors. There were about 400 seats in the auditorium, including a mezzanine. The basement lounge served coffee and tea and had art displays on the walls.

The Playhouse was operated by Louise Noonan Miller and Ilya Lopert, president of Lopert Films. In 1959, Trans-Lux Theatres acquired the theatre. Until the late-1960’s, the Playhouse was one of the most upscale movie houses in the city, showing art house and foreign films. It ended up showing adult films. After closing in 1984, it became a restaurant and copy shop. It is now an office building.

Contributed by local224, Howard B. Haas
Get Movie Tickets & Showtimes