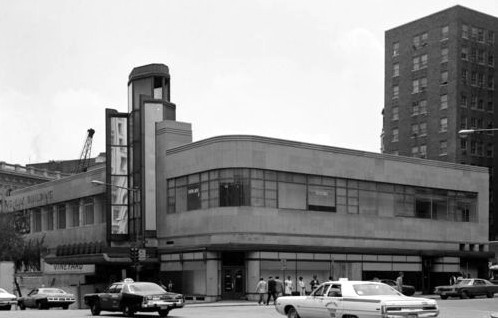 One of Washington’s most elegant Art Deco theaters, the Trans-Lux opened in 1936, located on 14th Street between H Street and New York Avenue NW, about a block from the White House. It was designed by Thomas W. Lamb, and could seat 600 in the auditorium, on blue leather seats. The auditorium was decorated with painted murals by New York artist Andre Hudiakoff depicting various sports (the Trans-Lux showed newsreels and shorts).

Its name referred to the theater’s rear-screen projection, which allowed for the house lights to be kept on low as patrons were constantly coming and going. During the 40s and 50s, a couple of radio stations had studios on the second and third floors of the Trans-Lux.

The exterior was notable for its huge aluminum tower marquee, one of the largest in the city, which featured etched glass with multicolored lights shining through. The theater was also one of the first public buildings in Washington to feature air-conditioning.

Starting in 1948, the theater switched from a newsreel policy to a feature film policy. The Trans-Lux was operated by Don King’s Town Theatre Group during the theater' s final year of operation (1973-1974) and renamed the Town II Theatre. It was demolished in 1975, and its loss is still mourned by Art Deco afficionados to this day.

Does anyone remember a D.C. movie theatre that in the 1940s and later was called the “Little Cinema” or “Little Theatre”? I’ve seen references to it but could not find it on Cinema Treasures. It was an art house. I’d like to know the address and/or other names for this place.

My father killed some time here watching newsreels while waiting for me to be born at GW Hospital across the street in 1938. Ten years later the TRANS-LUX switched from newsreels and shorts to first run movies, the first being ENCHANTMENT. It was an incredible success for decades and usually played the best Columbia Pictures such as BRIDGE ON THE RIVER KWAI, FROM HERE TO ETERNITY, ON THE WATERFRONT, PICNIC, others. The Trans-Lux got away with charging much higher admission prices than LOEW’S, RKO or other downtown theaters; prices about 35% higher every single time.
Following the Martin Luther King riot and looting spree and the subsequent unchecked crime that persisted for over a decade (2 blocks from the White House, no less) the final picture I saw here was a women’s prison R-rated sex flick called CHAINED HEAT. Too bad the Trans-Lux is long gone.

Worked the Trans-Lux a few times.. had a conventional booth, front screen, with Brinkert equipment.

Second floor of the theatre was divided into thirds the Eastern third (screen was on South wall) had an office then a cat walk through an equipment (ventilation)room, the booth was the center third. A viewing room (cry room?) was the Western third. The viewing room had several rows of seats (dozen??) with a side entrance into the booth but the main entrance was from the lobby stairway of the office building over the theatre. Great place to watch a movie from.. saw Jack Lemmon in “The Out of Towner’s” there..

Despite the above-market admission prices, the TRANS-LUX under Trans-Lux management was always a class act. They ALWAYS had a quality movie and would play it off for many weeks. Always a newsreel, in honor of their news heritage. Seating offered better legroom than any other theater anywhere. No popcorn or other destractions.

After the King Riot took its toll, Don King did the best he could considering the surrounding decline in civilization. The much loved VINEYARD Restaurant in the Trans-Lux Building also died, as did ALEX STUART’S Restaurant across the street. The strip of nice restaurants and night clubs immediately adjacent, including the Casino Royal where you might have seen Patti Page or Fats Domino prior to the Riot Era, the entire strip became a sex haven with prostitutes and pimps, the bars a good spot for a mugging. The New York Presbeterian Church (as in Fox’s “A Man Called Peter”) was completely surrounded by street hookers. Obviously, the Trans-Lux wasn’t drawing customers from the suburbs anymore. Having the cocaine mayor running the city was not a formula to facilitate peaceful moviegoing.

The Trans Lux in 1960 when I 1st came to D.C. was a 1st theatre for Columbia & Universal pics. Saw several Doris Day films there including Oillow Talk. Also saw The Wackiest Ship in The Army thete 1st run plus many other films. I was stationed at NAS Anacostia(the Photo Center) from 1960 -1962 and 1964 -1966. Always 1st run while I was there.

Washington Post obit article by Marc Fisher, regarding- longtime Washington morning radio host Frank Harden, 95, of Chevy Chase MD, died June 15 at home while watching a movie with his wife. Relevant here- “He introduced programs and read the news, on the radio, and at the Trans-Lux movie theater on 14th Street NW, where he provided a live news update between features on the silver screen.” From the article this sounded like 1940s, maybe 1950s.