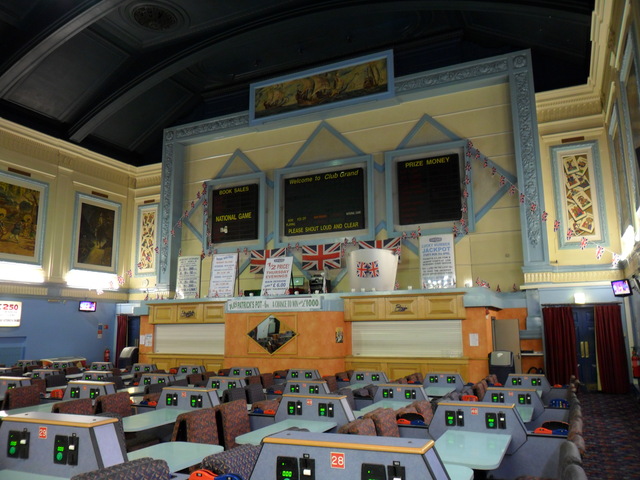 Located in the Westbourne district of Bournemouth, the Grand Cinema Theatre opened on 18th December 1922 with a production of "Anthony and Cleopatra" performed on the stage. The following day it screened its first film ""A Prince of Lovers" plus a Harold Lloyd short comedy.

It had a façade covered with Carter’s Architectural Tiles, manufactured at the Carter pottery in Poole. There was a central bay over the entrance which was topped by a revolving globe, which was illuminated at night. The auditorium had a sliding roof which could be opened in hot summer weather. There was a lift which could be taken instead of the stairs to the balcony level and the café. The front of the orchestra pit barrier was also covered in Carter’s tiles.

Initially an independent cinema, it was taken over by Savoy Cinemas and became part of the original Associated British Cinemas(ABC) circuit. For a short while, from May 1933 to 1935 it was leased to Regent Cinemas and then went back to ABC control, being re-named Grand Super Cinema.

It was taken over by an independent Snape Entertainments from 21st December 1953 and they operated it as a full time cinema, becoming G.B. Snape Group of Assoc. Cinema Companies chain until 8th October 1975 when the film "They Love Sex" was the last regular film shown. It went over to become a full time bingo club, until a mix of part week bingo and films were introduced from 27th March 1976.

The Grand Cinema screened its last film "In Love With Sex" on 8th October 1977 and since then has operated as an independent bingo club until closing in December 2017. In 2020 it was planned to be converted into a gymnasium, but this never happened. In August 2021 the building is ‘For Sale’ for £1.6 million.

The Grand Cinema is a Grade II Listed building.

This cinema should also come under Bournemouth……. Westbourne is just a suburb like Winton, Moordown or Boscombe.