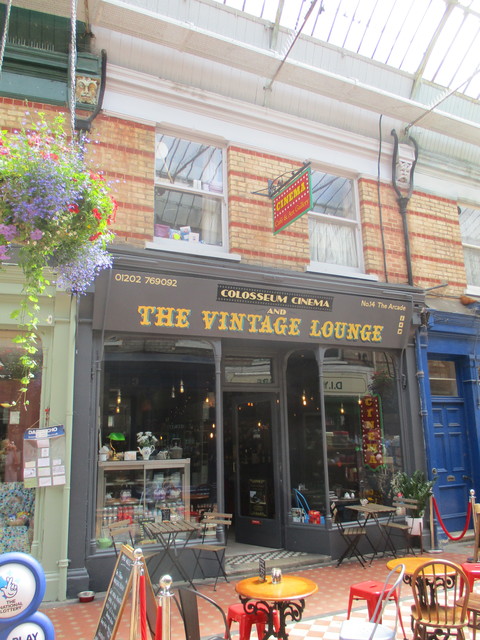 In Bournemouth, Dorset, the suburb of Westbourne had been without its own cinema since 1977, when the Grand Cinema closed. All that changed on Monday 30th September 2013, when Paul Whitehouse, owner of the Lavish Life art gallery and coffee shop, situated in the Victorian-era Westbourne Arcade, opened the Colosseum Cinema in the basement.

With just 19 seats, including a two-seat ‘Royal Box’, this is officially billed as “The Smallest Cinema in the UK”. The council was very supportive during the construction process, which included a considerable amount of sound-proofing! Local TV dealership Dawsons AV sponsored the venture by donating state-of-the-art equipment, including a 3D JVC high definition projector, with 5.1 surround sound through a Bang & Olufsen BeoLab 14 loudspeaker system. The seats came from the Welsh National Assembly.

The opening film was the Billy Wilder drama “The Apartment”. The programme consists of older films, usually with matinee and evening screening each day. Naturally, the cinema is also available for private hire.

Paul Whitehouse closed the Lavish Life gallery in early-April 2017. Annaliese Hawksworth took a lease on that upstairs space and has transformed it into The Vintage Lounge, a very comfortable and attractive coffee shop, which opened on Tuesday 16th May. While Paul is absent, Annaliese operates the projection equipment.

I visited on Tuesday 4th July 2017. Appropriately, the matinee screening was Oliver Stone’s “Born on the Fourth of July”, starring Tom Cruise. The seating, hampered by the restricted space, is fairly basic, and I was interested to hear very sensible plans to reduce the size of the adjacent foyer/bar and remove the dividing wall so the auditorium can be extended. This way comfortable ‘lounge’ type seating could be installed without any loss of capacity. However, the most ambitious plan is to open a second screen, with just eight seats, in the basement of an adjoining building!

I thoroughly enjoyed my visit, and meeting Annaliese, and I wished her and Paul all the best. I look forward to visiting the ‘new, improved and extended’ Colosseum in due course!