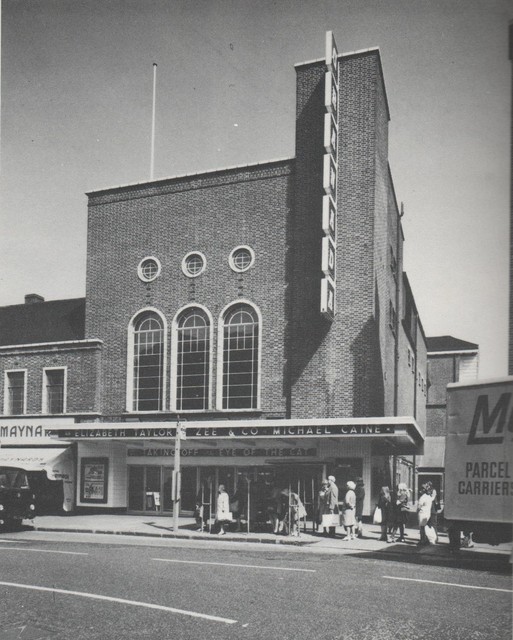 In 1938 the Hyams Brothers were granted permission to build a cinema in Clarence Street, in the centre of Kingston upon Thames. It was due to be named the State and would have joined the other State Theatres at Kilburn and Holloway, which were taken over by Gaumont British Theatres. Here at Kingston, the half completed building was taken over by Granada Theatres and on 1st June 1939 new plans were approved. These mean’t scrapping the proposed restaurant above the foyer and the curved proscenium arch, but retained the original architect George Coles, with Cecil Masey acting as consultant architect. Granada’s favoured interior designer Theodore Komisarjevsky was brought in to design what was a referred to as a ‘standard’ Granada interior.

Due to the outbreak of World War II in September 1939, building work slowed down and the Granada Theatre opened on 3rd November 1939 with Don Ameche in "The Modern Miracle"(The Story of Alexander Graham Bell) and Sandy Powell in "Home From Home". It was opened by film star couple Jesse Mathews and Sonnie Hale who lived locally in Hampton. Noted organist Reginald Dixon opened the Wurlitzer 3Manual/10Ranks organ with attached Grand Piano (it had originally been installed in the Picture House, Edinburgh as a 3Manual/8Rank instrument). There was a fully equipped stage and the the proscenium opening was considered to be extremely wide. The screen size was 30 feet wide and 24 feet tall and was stated to be ‘among the largest in the world’. There was a car park located at the rear of the cinema in Cromwell Road.

Externally, there was a brick tower feature to the right of the entrance and on the entrance facade there were three large windows which allowed light into the foyer. The auditorium was set at right-angles to the entrance and ran parallel to Clarence Road behind three shop units. Inside the auditorium there were three decorative grilles on the side splay walls which had the organ chambers behind. A large central feature in the ceiling was highly decorated and contained a ‘Granada’ chandelier.

The Granada Theatre was converted into a triple screen cinema from 19th December 1973 with Screen 1 seating 975 (697 in the former circle and 278 in the former front stalls), Screens 2 and 3 were located in the former rear stalls beneath the circle and seated 194 and 211. The Wurlitzer organ was retain and was used for Sunday morning concerts until 1982 when it was removed.

The Granada Theatre closed on 29th January 1987 and the following day was given a Grade II Listed building status by English Heritage.

The former circle and front stalls areas became a nightclub and the two mini cinemas were retained and expanded, with a further screen added in an upper section of the building. They re-opened on 11th December 1987 as Options Cinema with seating for 303, 287 and 208. Taken over by the Cannon Group in January 1989, they were taken over by Virgin from July 1995 and finally by ABC from 3rd May 1996.

The ABC Cinema closed on 28th August 2002, the entire building is now a nightclub named Oceana. Recently it has had a re-furbishment and can now acommodate 2,500, has two dance floors and five bars.

Vintage photographs of the Granada, and its Wurlitzer organ console:
http://www.ukwurlitzer.co.cc/2230.html

It wasn’t Reginald Dixon but the far more famous broadcaster organist Reginald Foorte. He was the resident organist at the regal (ABC) and there was an outside broadcast connection in a doorway on the corner of the building that the BBC connected too.

I did see some films there. Also in the early 1960’s I visited the projection box. There was a Projectomatic system, and 4 track magnet sound. At the end of the last evening show the motorized screen tabs would be closed from the box, but one of the projectionist would go down to back stage to hand wind the main house tabs closed.