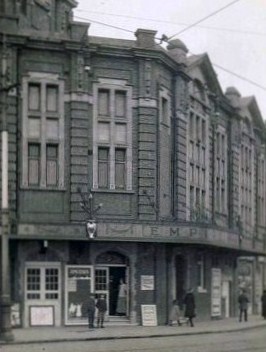 The Empire Music Hall Theatre opened on 20th October 1910. It was operated by independent theatre owner Clarence Sounes. It was built with a projection box, so that films could be shown as part of the variety programme. The exterior of the building is in an English Renaissance style, with a trim of Portland stone on its edges. The decoration of the auditorium was in a Grecian Renaissance style. The auditorium was severely damaged in a fire in June 1919, and it took a while to rebuild and renovate the auditorium.

In 1930, under new owners Kingshott Theatres, the Empire Theatre was redecorated, and refurbished. Over the years, it hosted many top name acts on its stage, including; Gracie Fields, Jack Hylton, Max Miller, Florrie Forde, Flanagan & Allen, Marie Lloyd, Harry Champion, George Formby, Louis Armstrong, The Western Brothers, George Robey and many others.

The Kingston Empire Theatre was closed on 27th March 1955 with Sonny Jenks in “La Vie Parisienne”. The interior of the theatre was gutted, and a supermarket opened inside the building in November 1956. On 10th July 1997, it opened as a pub in the JD Wetherspoon chain, known as the Kings Tun.

What a theatre! Thanks KenRoe.I do enjoy looking at all you get on.I don’t know if folks thank you enough.Have a Merry Christmas.

The building looks very ‘complete’, what is left inside. The foyer areas still very much resemble the foyers areas of a once great theatre.

And it seems to me all the great Theatres are in Europe.

Let’s not forget Phyllis Dixey and ‘Daily Mirror’s Jane on stage at Kingston in the late 1940s. Eye candy for us war weary chaps in post war Britain. Thanks Empire,you done us proud.