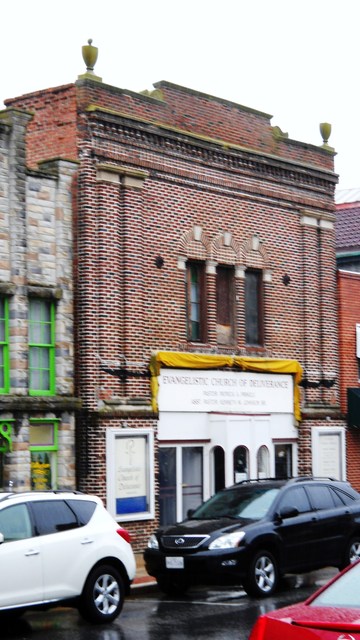 The State Theatre was operated by F.H, Durkee Enterprises in 1957

A neat little find in the Harbor of Grace. 2010 photos of the former State Theatre: 1, 2

This theatre was called the New Willou when it first opened in 1918 and was renamed the State during the 1930s.

A book called “Maryland’s Motion Picture Theaters”, by Robert K. Headley, says that the first Willou Theatre opened in a former harness shop in 1908, and that the Bijou was also in operation by that year. The 1918 opening date Jack Coursey mentions for the New Willou must be when the theater was renamed. Headley says that the State was opened by Durkee Enterprises in September, 1927.

Headley also says that the City Opera House, on Union Avenue, had exhibited movies by 1908; became a full time movie theater in 1917; burned and was rebuilt in 1921, and ran movies as late as 1929, when it was leased by Durkee.

Possibly, Durkee leased the rival house in order to shut it down and thus eliminate their State Theatre’s competition.

So Joe, the State is the only theatre on CT in Havre de Grace. From your research you have found additional venues which could be added.