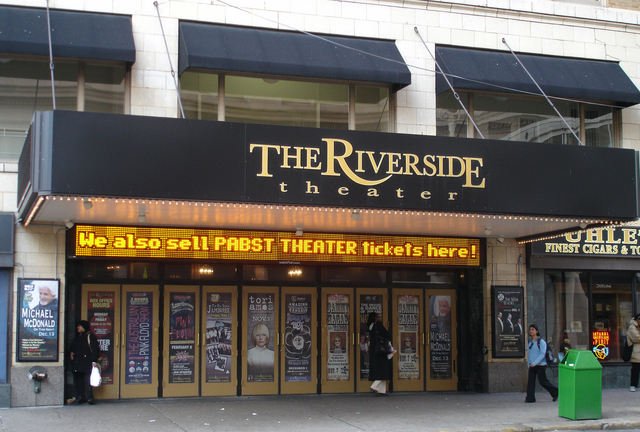 The Riverside Theater is probably the most graceful, if not the most opulent of Milwaukee’s theatres and it comes by its name, honestly, by fighting to keep the adjacent Milwaukee river out of its basement. The Riverside Theater was opened on April 29, 1928 with Chester Conklin in “The Big Noise” on the screen and Ezra Buzzington’s Rustic Revelers on the stage.

When the RKO (Radio-Keith-Orpheum) vaudeville circuit was looking for a larger, fancier venue to replace their 1908 Majestic Theatre, they bought into the firm demolishing the Empire Hotel and Tavern at the prominent intersection of Grand Avenue (now Wisconsin Avenue) and West Water Street (now Plankinton Avenue) to build the Riverside Theater within the new 12-story Empire office building with an alley and the river forming the other two boundaries (that cramped alley is a vexation to generations of stagehands who have to load in a show, and more than one piece of scenery has found itself in the river by accident).

Vaudeville was on its last legs by that time so the theatre was to be a presentation house with 2,558 seats on the orchestra level plus three boxes on each wall below the organ screens and in a huge balcony reached by a lobby elevator. Local architects Charles Kirchoff and Thomas Rose had done well in designing the famous Palace Theatre in New York City, so they were selected to bring about this French baroque vista in colors of ivory and gilt with peacock blue accents.

A mixture of vaudeville and films continued for years until Warner Bros. took over for a while (until their own opulent Warner Theatre (now called the Grand Theatre) was completed in 1931, just two blocks away).

By 1982, United Artists had run the Riverside Theatre into the ground for many years. The original 3-manual, 13-rank Wurlitzer theatre pipe organ barely worked as did few of the light bulbs in the five auditorium chandeliers (three of them traditional confections of crystals, but the others are odd but beautiful ‘banjo’ shapes in front of the organ screens).

The ceiling also has a giant central dome with tri-color cove lighting nicely concealed by an ornate rim of cabochon-faced crests. The original Grand Drapery graced the proscenium arch with 20 swags of teal velour with galloons in ochre and tassels in henna red upon a lambrequin of Austrian folds decorated in beige and fringed in henna. Behind and below this the beige teaser curtain hung in swags and jabots while the tormentors were in beige framed in teal galloons and bullion-style fringe.

All this beauty perished in 1966 when a patron tossed a cigarette onto the stage and it all disappeared in the ensuing fire.

Thankfully, the automatic sprinklers back stage saved the structure until the firemen came. A simple panel of 30% fullness dark red duvetyn replaced all this when the estimated cost to replace originals came in at $590,000!

When UA’s lease expired in 1982 they did not renew, and the owner, Towne Realty, had plans already drawn to demolish and make either a shopping mini-mall or a large parking structure, but a downtown revitalization was starting and this writer sat on a committee of volunteers to "Save The Riverside."

Perhaps it was our publicity through a local radio station, but within a few months the owner of Towne Realty, local millionaire Joseph Zilber, agreed to fund the $1-½ million needed to largely restore the grand old lady, the Riverside Theatre, at which he had enjoyed many events in his youth.

The theater had a Grand Re-Opening in 1984 which was attended by thousands to enjoy the gorgeous newly lighted, gilded, and re-draped auditorium. The colors became golds and reds, and there were again lesser swags of drapery on the proscenium and about the house, but it was warm and inviting once again.

The basement walls were fixed to keep the river at bay, yet again, and even the Wurlitzer was again heard largely through the self-sacrificing efforts of the Dairyland Theatre Organ Society, which also sponsored a recording of the organ called: "Down By The Riverside."

After that, the theatre became a ‘road house’ to many touring groups and remains in that use today.

Since the projectors were removed in 1983, it will have to struggle on the dwindling number of road shows available. The succession of operators of the theatre since 1984 have had varying degrees of success, but the present operator is having a rough going and now even charges the owners of the Wurlitzer, Dairyland T.O.S., a stiff fee to put on concerts.

This theatre is well documented in "American Theatres of Today."

In recent years the Riverside Theatre has turned almost entirely to concerts and performing artists, and given the the busy schedule showing on their website, it looks like they are doing quite well with their current programing.

Hi. My name is Mark Zimmermann and I’m writing a book on the history of the Riverside Theater. I was manager there in the mid-70’s when UA was running it. While there I secured several old storage rooms on the second floor from vandalism, and I found two old scrapbooks of newspaper clippings and reviews from approximately 1942-1950. Luckily, the manager back then was wise enough to save this for history. I saved them for all these years, and after the success of Larry Widen’s recent book I decided to research the entire history of the Riverside at the Milwaukee Public Library. It’s amazing how many stars came to Milwaukee to perform for an entire week at the Riverside, from Bob Hope, Frances Gumm and the Gumm Sisters, to Abbott and Costello, Chico Marx, Lucille Ball and Desi Arnaz and Laurel and Hardy. The one thing I’m in need of is personal stories from people who went to the Riverside to see the Stage and Screen performances in person. I’ve interviewed 3 people who attended the Riverside regularly back in the 1950s. If there is anybody out there who attended shows from the 1940’s to the 1970’s and would like to share their stories please contact me at Thanks.

Here’s amazing rare footage of Laurel and Hardy on stage, circa 1940! http://www.youtube.com/watch?v=ti5EK_c5-Iw

Even better,
an ad for Milwaukee’s Proudest Possession, the grand opening ad can be seen at View link

Preopening ads is at
View link
and
View link

There’s a great 1928 photo of the Riverside on the Historic-Memphis.com website’s Theatre page. Here’s a link to the page.

ONE OF THE VERY FEW THEATER PIPE ORGANS STILL IN ITS ORIGINAL THEATER LOCATION!

This Mighty WurliTizer was first played when the Riverside opened by “Winkel” the Whiteman, and was regularly used into the 1950’s. The theatre donated the organ to the Dairyland Theatre Organ Society and they began a restoration of the organ in 1980, repairing much water damage from a leaky roof, and ordinary wear and tear. Much to everyones chagrin the organ is rarely played!

More info, comments, corrections, and photos of the ORGAN are always welcome!

I was the Riverside Theater Organist, 1969 & 1970. I used to perform up to 10 shows each week from about January ‘69 until mid-Fall, 1970. I had free run of the place anytime I wanted. The organ was on the elevator that serviced the orchestra pit. I would literally climb over the pit railing and down into the hole to power-up the organ. From down there, I could control the theater spot lights as well as the elevator itself. I would I found the experience, musically speaking, challenging because of the echo off the back of the theater and the balcony. You could hear each note more than once. I never explored the basement but back-stage was cool (& dirty). The picture above showing the organ is exactly how it was. I would rise up out of the pit in the spot light playing. This is the only pic I have ever seen and I have none of my own. – very grateful.