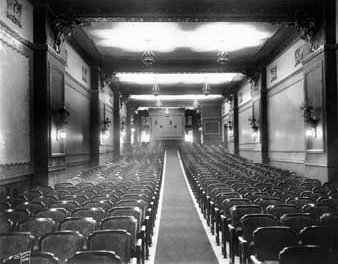 The Toy Theatre was a silent movie theatre that was located in Milwaukee. This theatre opened in 1915 and closed in April 1924.

The TOY theatre was not named so because it was small, though 460 seats would make it far from the largest, but due to the fact that the principal original tenant of the six story commercial building was Toy’s Chinese Restaurant. The skeleton letter light bulb sign projected from the facade with the upper frame reading “Toy’s Chop Suey” and the lower frame reading “Toy Theatre” with lines at bottom to put in the title or actor of the day. A loggia with upturned eaves of clay tiles adorned the second story above the entry on the floor below. Along with brass Oriental lanterns illuminating the loggia, the copings flanking the steep mansard of tiles at the roof line were terminal coping pieces of dragons in terra cotta to further advance the theme. While nothing is known of the theatre’s portion of the building, it is known that the restaurant sported winged dragon sculptures atop the square, dark wood columns and beams, so likely the cinema was similarly decorated. The building was most notable for housing many of the city’s early film exchanges in the early days. By time the TOY ceased operating in 1924, the movie palaces were coming upon the scene, and modest cinemas like this were difficulty to adapt in so small a size, so conversion to other uses was customary. When the building was demolished to make way for a new brick office building (itself demolished in the 80s), Milwaukee lost one of its few Chinese themed structures, though surviving examples of a unique Chinese-themed chain of gasoline stations from that day do still keep the sight alive in some areas. Ironically, the Toy restaurant survived several moves over the years and only went out of business recently, long after any memory of a Chinese theatre that probably never showed Chinese language films was long gone too. The TOY was also called the PARADISE and the IMPERIAL at different times. The TOY was designed by local architect Alexander Guth.

Some views of this building appear as postcards in Larry Widen’s recent book “Vintage Milwaukee Postcards” and will also likely appear in his soon-to-be-released book “Silent Screens,” a sequeal to his 1986 “Milwaukee Movie Palaces.”

Here is a photo of the Toy Theatre, clipped from volume 1 of a 1922 publication, “History of Milwaukee” by William George Bruce and Josiah Seymour Currey (scan available at Google Books.)

It looks like there was another theater right next door to the Toy.

Nice photo Joe, your right looks like another theatre next door.

Hi, I am very interested in the film exchanges which were located in the Toy Building. Does anyone have any information about these? Thanks, Leslie

Apparently Charles Toy also owned one of the film distributing companies in his building. This item about the closing of the theater, but which also mentions the exchange, is from the May 3, 1924, issue of The Moving Picture World:

“The Toy Theatre, located on Second street, just north of Milwaukee’s main street, has been closed by Charles Toy, its owner, and will be remodeled shortly into a store. The house had the distinction of being Milwaukee’s smallest downtown film theatre, it being equipped with only 425 seats. For some time it has been considered a losing proposition, and with the opening of the Wisconsin by the Saxe interests the going became even harder. George Beyer, manager of the place for six years, has accepted a position with the Midwest Distributing Co., also operated by Toy, the Chinese cafe and theatre owner.”

The 1921 edition of Polk’s Wisconsin State Gazetteer and Business Directory has this entry: “Mid-West Distributing Co, Moy B Toy pres, D G Stover sec-treas, film exchange 174 2d.” (Milwaukee underwent some drastic address renumbering in the 1930s, and 174 2nd was the old address of the Toy Building.)

That’s all I’ve dug up about the exchanges so far.