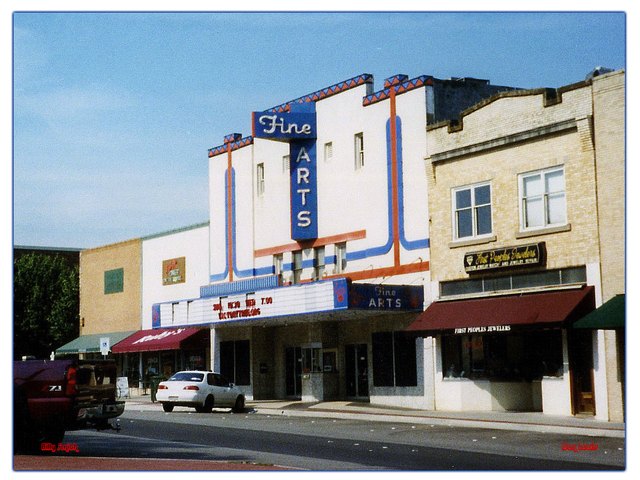 The Texas Theatre was opened August 28, 1935. The building stands out due to a clean orange, white and blue color scheme. The front is white trimmed with orange and blue. The marquee runs the length of the building and shelters the entrance and outside ticket booth. Above the marquee is a blue sign where the theater’s name is spelled out in white letters and neon trim. It was renamed Fine Arts Theatre in 1957.

Restoration work began in 2014, with a planned reopening for Fall of 2014.

here’s a collection of photos from last year, when being turned into a church:
View link

A photo of the Fine Arts Theater @ this link.

The Fine Arts Theater was built as the Graham Opera House in 1877
by George & Henry Fastorff.
In 1935 the Interstate Theater Circuit remodeled the building, and
put the Texas Theater into operation.
In 1954, the Texas was purchased by Trans Texas Theaters, and in
1957, it recieved yet another new name Fine Arts.
The structure went through some tough times, but is still standing
as a reminder of yesteryear. Billy H

A 1938 view of the Texas Theater in Denton before it became the Fine Arts.

I think this is a W. Scott Dunne design.

We are currently working on restoration of the Historic Fine Arts Theater. Please follow us on Facebook or Twitter. Also, thanks to all of you who have done research, shared photos, etc. www.facebook.com/TheFineArtsTheater Twitter: @FineArtsTheater

The Dallas Group Behind The Texas Theatre Plans To Bring A Similar Model To The Historic Venue It Plans To Re-Open On Denton’s Downtown Square In 2020 https://www.centraltrack.com/owners-of-dallas-texas-theatre-buy-dentons-fine-arts-theatre/