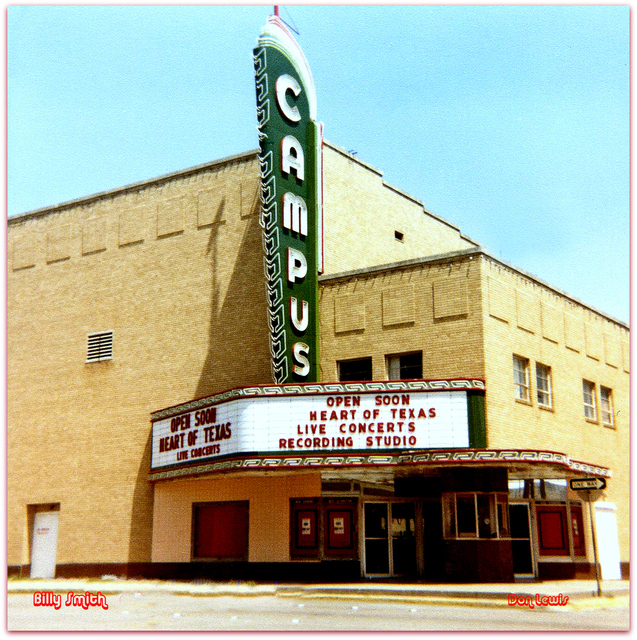 The Campus Theatre was constructed in 1949 as the Southwest’s premiere movie theatre for Denton, Texas. Over 30 tons of steel was used to construct the movie theatre and it cost over half a million dollars to build. It was opened October 4, 1949 with Cary Grant in “I Was a Male War Bride”.

Today, it is a performing arts facility. Over 32,000 visitors come each year to see live performaces at the Campus Theatre.

A 1985 photo of the Campus Theater in Denton.

OK, I won’t post any others. I didn’t know you were on it.

Hi Guys,
Gotta put in my two cents.
Yes, Henrietta is a very small town in North Central
Texas.
Population in 2000 was just over 3,000. It’s not
considered a neighbor of Denton and nowhere near it's
size. Denton has two universities and is the county
seat. Heck, when I went to North Texas ( now UNT ) our
university alone had 12,000. I think back then with
TWU we made half the population of 40,000. I think
Denton is closer to 130,000 now.
The Campus (off square note your photo you can see the
courthouse over neighboring building) is still there
they are live performance theater, the Fine Arts ( on
the square ) still stands, hosts a church I believe,
the XXX Theater ( on square )long ago closed but is
now occupied by a business. There was at least one
other movie theater away from the square on University
Drive I think. I got a ticket for a red light there
after we’d seen some movie on rodeos done in the
fashion of “On Any Given Sunday”. I seem to remember 2
drive-in theaters but can’t recall names. Do remember
seeing “Death Race 2000” (starring David Carradine) at
the drive-in north of town. We had a car full, it
rained buckets, and we were more interested in downing
the case of beer we brought! Still it was a funny
movie then and now.
As for theaters there now? Well, there’s a large mall
south of town on I-35 called Golden Triangle Mall.
There’s bound to be a plex there and more around town.
Town’s changed alot since my college days in 1970's
Ken

A promo shot for the October 1949 opening of the Campus Theatre in Denton Texas.

This theater has now been officiallyy designated as a Texas landmark: View link 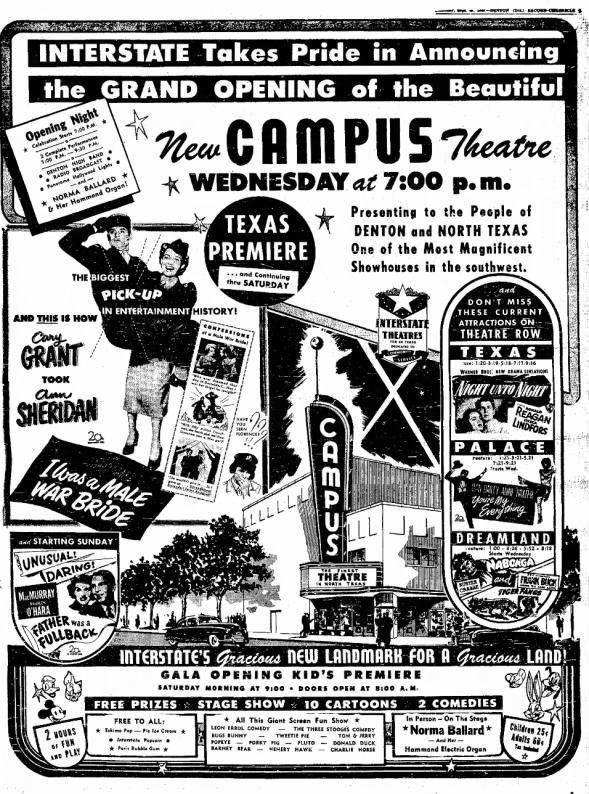