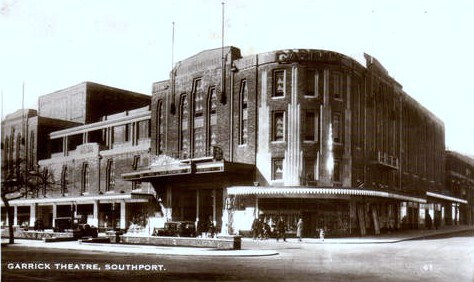 Located in the Merseyside seaside town of Southport. After the Opera House burned down in December 1929, the site was cleared and architect George E. Tonge prepared plans for a new theatre which opened on 19th December 1932 with Gladys Cooper in the mystery drama “Firebird”, direct from the Playhouse Theatre, London. It was, and remains, a glorious exercise in Art Deco style, inside and out.

Situated on the premiere Southport thoroughfare of Lord Street at the corner with Kingsway, the Garrick Theatre initially operated as a live venue only. The theatre was well provided with front of house space and had a spacious auditorium on two levels (plus boxes) seating 1,600 (later reduced to 1,500). The original colour scheme was yellow and gold with green and black highlights, all lighting was indirect via troughs except for a chandelier in the centre of the balcony recess. There are four boxes on either side of the stage. The theatre was advertised as the most beautiful in Europe upon opening.

The stage was particularly large, and was designed to accommodate touring drama, musicals opera and ballet and a pantomime was produced at Christmas. The proscenium arch is 50 feet wide. Live shows ended on 19th January 1957 with the pantomime “Robin Hood on Ice”. There was an open colonnade terrace containing an ornamental garden on the top of the Lord Street elevation, which was used in summer months.

The Garrick Theatre was sold to the Newcastle upon Tyne based Essoldo Cinemas chain in January 1957 and the follow-spot box was converted into a projection booth. It opened as a cinema on 21st January 1957 with Elvis Presley in “Love Me Tender” & Maureen O'Hara in “Miracle on 34th Street”. It was briefly re-named Essoldo in the late-1950’s, but the Garrick Theatre name was soon re-instated. There were occasional stage shows, but these were not a success and from May 1962 it screened films only. During 1963 bingo was introduced on Sundays and Fridays. On 16th November 1963 it was closed as a cinema with the film “Tom Jones” starring Albert Finney. It was converted into a Lucky 7 Bingo Club (from 1984 a Top Rank Bingo Club and finally Mecca). It was closed in March 2020 due to the Covid-19 pandemic. In April 2021 it was announced by Mecca that the closure would be permanent, as their lease was about to expire on September 28, 2021.

Logic would suggest that the Garrick Theatre be returned to theatre use and the single floored Southport Theatre be turned into a modern bingo hall for Mecca - to the benefit of both parties!

On 29th July 1999, the former Garrick Theatre was designated a Grade II Listed building by English Heritage. In February 2022 it was added to the Theatres Trust list of “Theatres at Risk”.

Just to avoid confusion the Palace/Classic/Cannon/ABC, also in Lord Street, was briefly called the Essoldo from 1971 to c1972.

I have just learned that the former Garrick was listed by English Heritage in 2007.

Another exterior taken shortly after conversion to the Lucky Seven Bingo Club:–

2 new photos, photographed on Easter Monday 2012. It was a very wet day, which accounts for the “blob” on the picture which I did not notice on the camera’s screen.

What happend to this building? Is still Mecca Bingo in this theatre? You can play this online like http://www.greatbritishbingo.co.uk/ .