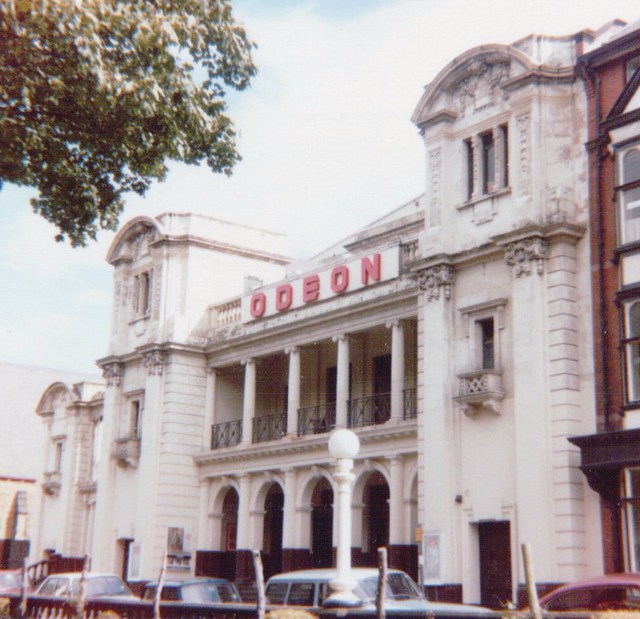 There were approximately 700-seats in the balcony and 1,500-seats in the stalls. Decoration was horizontal bands of blue green and red, separated by silver lines above a polished walnut dado. Lighting was mainly indirect, but boosted by a series of Art Deco style chandeliers in the ceiling. A Compton 3Manual/10Rank organ was installed. The proscenium was 52ft wide and the stage 30 feet deep. There was also a large restaurant.

The ‘New’ was dropped from the re-opening name of New Palladium and later, in 1950, it was renamed Gaumont. In 1962 it was renamed Odeon. The Rank Organisation closed the Odeon on 28th November 1979 with “Confessions of a Pop Performer” and “A Game For Vultures”.

After a long decline, the supermarket chain Sainsbury’s made an offer for the site, and despite it’s Listed building status and the fact that it was in a Conservation Area, permission was granted to demolish and the Odeon was reduced to rubble in the summer of 1980.

How much would it have taken to at least incorporate the supremely elegant façade into the shop?

does any one have any more information or pictures of this cinema/theatre, in specific the organ (A83 COMPTOM installed 1930), but any information will do. please could you post here or email me at

A further picture a year or so before closure here:–

The Compton Organ was the 2nd such instrument installed in Gaumont houses (prior to 1930 Wurlitzers were used) and was a 3 manual 10 rank instrument with a new design of console unique to Gaumont, not illuminated the console was solid and seemed to be of wood with many scroll embellishments. It appeared to be on a lift in the centre of the orchestra pit and was opened by Leslie James, who was succeeded by Herbert Steele. It apparently survived in situ until the 1970’s.

The Compton organ was removed and eventually installed in the home of Manchester organist Joyce Alldred (who also had the Grand Southport organ in their organ shop).It was then sold to a Cheshire Farmer and the last i heard was in store awaiting installation.The console was Comptons take on the wurlitzer french style.This organ also had a French Trumpet of 37 notes.

I have posted a photo of Herbert Steele and the organ. Also a photo of my Grandfather Charles Brown (manager of the Palladium) presenting a cheque to Herbert on his retirement after 23 years.

This reopened as the New Palladium Cinema on 1st October 1930 per http://cinematreasures.org/theaters/39330 .