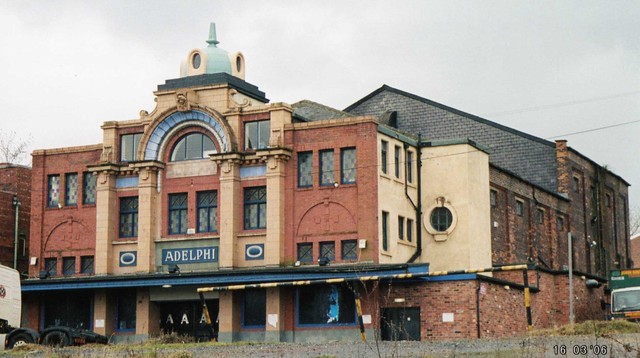 The Adelphi Picture Theatre is located in the Attercliffe district in the east of Sheffield. It opened on 18th October 1920 with Irving Cummings in “Auction of Souls”. The red brick building has buff and blue coloured terracotta enrichments on the façade, especially on the small turret dome over the entrance, which also has stained glass windows.

Seating in the auditorium was provided in stalls and circle, and the projection box was located in the rear stalls, underneath the circle. The cinema was in reverse and patrons entered the auditorium from behind the screen. The decoration includes pilasters, a segment-arched panelled ceiling and a moulded proscenium arch with a central crest which is flanked by torches. The circle has a lattice-work plaster front.

It underwent some restoration in 1936 and a re-decoration in August 1939. It received some bomb damage during the second week of the blitz and was closed for around a month. It received further renovation in August 1946. It remained an independently operated cinema throughout its cinematic life and was usually tied in with the Coliseum Cinema on Spital Hill.

The Adelphi Picture Theatre closed on 28th October 1967 with Robert Vaughn in "The Karate Killers" and "Glenn Ford in "The Rounders". It became a bingo club, last operated by the independent Walkers Bingo. After this closed in around 1995 it became a nightclub and since March 2000 was converted into a music teaching centre. This closed in 2006, and the building stood unused, and by 2013, it was in use as a storage facility.

Since early-1996, the Adelphi Picture Theatre was designated a Grade II Listed building by English Heritage.

Now in use as a storage facility (July 2013). Worryingly the interior was said to be stripped and re-plastered.

The architect was William Carter Fenton (1861-1959). Alderman and Lord Mayor of Sheffield. Former Corporation Chief Building and Architectural Surveyor before establishing the architectural practice of Hall and Fenton.