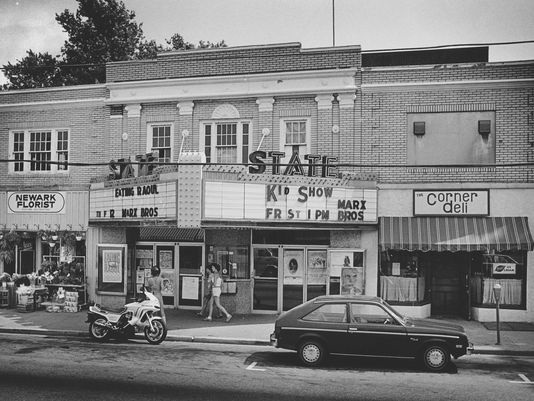 The State Theatre opened in May 1929. I do not know too much about the State Theatre, except that it was closed near the end of the 1980’s. It was located at the end of Main Street in Newark, right near the University of Delaware campus. They would show revival and older films (I saw “Blade Runner” there in 1984). They showed “The Rocky Horror Picture Show” just about every weekend and “The Song Remains the Same” from time to time.

The State Theatre was torn down in the mid-1990’s (I think) to make room for a small shopping mall. If anyone has any information, it would be appreciated.

The NRHP nomination form for the State Theatre says that it opened in May, 1929. The building was listed on the National Register of Historic Places in 1983.

The State Theatre was built by Louis Handloff, who had operated a small theater on Main Street called the Hanark for several years. He closed the Hanark Theatre when the State opened. Handloff also bought the Newark Opera House, an 1885 theater that sometimes showed movies during the silent era.

An organization called Video Americain says that they operated the State Theatre as a repertory cinema from 1979 until mid-1986.

I fell in love with Haley Mills in 1962. I was 9 years old and she stared in the film “the Castaways"at the State Theater. What a great place to watch a Saturday Matinee. Abbot & Costello, Jerry Lewes,old cowboy movies. My dad went there as a kid too. After the movie we would go to the Delux Grill next store for a cherry soda. Newark was great back then. Fell sorry for the kids now. Can’t have memories like we did.

My mother and father in law met at the State Theater prior to dating. They did get married, had 6 daughters and are still married and alive as of July 5, 2014.

The July 6, 1929, issue of Motion Picture News said that the new State Theatre in Newark, Delaware, had been designed by Philadelphia architectural firm Hoffman & Hennon.

On most Saturdays during the early sixties my parents would give us kids $.50 each ($.25 for the movie and $.25 for candy). Loved that old theater and lots of good memories. Sad that it was torn down.

The last manager of the State Theater would go on to own the chain of video rental stores called Video Americain. Newark had one of the locations with two more in the Baltimore area. Unfortunately, the chain closed in 2014.

Many times, my wife and I were the only people for a show…remember Fellini’s Armacord in particular. The projectionist yelled down to make sure we were comfortable during the previews. Before the theater was torn down, the “destruction” company opened up the back wall and gave the public 1 hour to take anything that was left. I personally loaded the center front row of seats (row of 6) into my pickup; but, have no documentation as verification (other than the original gum under the seats). There was a large art-deco clock (φ 3') high on one wall that I would have loved to take. I remember it was the first thing the wrecking ball hit. Ouch!

The Newark Historical Society has the two large STATE (theater) signs. The National 5 & 10 store on Main Street, periodically displays the STATE signs in their large windows.