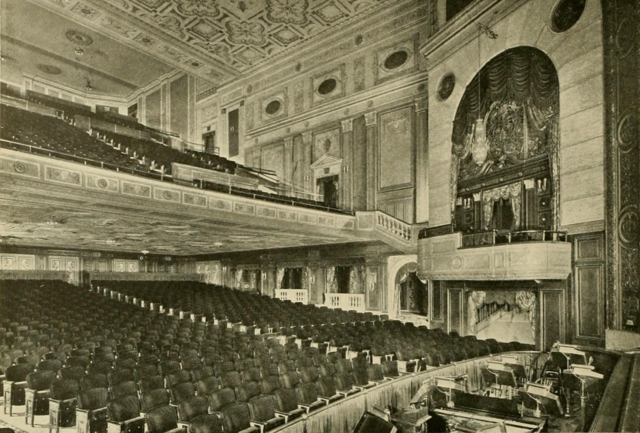 After the original Forrest Theatre was demolished in 1927 on South Broad Street, the two theater operators went their separate ways. The Shubert organization built a new Forrest Theatre on Walnut Street. Abraham Lincoln Erlanger built his own theater, the Erlanger Theatre on the northwest corner of 21st Street and Market Street. Prior to the decision of the Shuberts to build separately, this theatre was going to be called the New Forrest Theatre.

The Erlanger Theatre was Philadelphia’s most elaborate legit theatre ever and one of the most magnificent ever built in the United States. The exterior was Georgian. The elegant interior was furnished in Napoleonic French and other period styles. Three lobbies, the grand stairs, lounges, and the 1,890 seat auditorium were elaborated decorated and furnished with imported marble, gold leaf, murals, tapestries, crystal chandeliers, crystal mirrors, antique wood-work, hand wrought ironwork, and elaborate furniture. The Spanish Lounge for smoking was especially magnificent. Philadelphia theater architects Hoffman-Henon Co. designed the theatre.

The Erlanger Theatre was famous for Broadway musical stage shows such as "Guys and Dolls" "West Side Story" "Man Of La Mancha" "My Fair Lady" Movies were also shown. The theatre ceased showing Howard Hughes' movie "The Outlaw" (1943) because of church objections. Goldman couldn’t show all the movies he wanted because Warner Brothers controlled so many other theatres and had such leverage. So, Goldman filed an antitrust lawsuit that forced Hollywood studios to sell off their movie theatres.

Starting in 1968, the Erlanger Theatre became a restaurant, a night club, a venue for rock shows, and had great success with more legit stage shows. Overall, the Erlanger Theatre continued in the red, and was demolished in 1978. The Philadelphia Historical Commission seemed to note its importance in taking many photos. The site became a parking lot for three decades. In 2008, the Murano residential tower was built at its old site.

Photos here View link but you need a subscription to make them larger.

Type Erlanger http://diamond.temple.edu:81/search/ for exterior photos of protesters upset a Communist rally was being held inside the theater, and a view of the auditorium facing the balcony.

Here is a February 1938 photo:
http://tinyurl.com/kucvxt

Chuck; here is the full address of the 1938 photo;
View link
The source home page of the photos is:
View link

All work ok with me, so if you are having a problem opening them, it could be a settings issue on your firewall or as LM stated above, your service provider.

The part about the illegal sign was mentioned on some other 1938 photos. It apparently had something to do with the projection of the marquee over the street past some statutory limit.

listed on October 23rd, 1927 as an ligitimate theatre

not an grand opening ad.

Philly sounds like Seattle in that most of the elaborate theatres from the past are gone. At least there are 4 or 5 left now in Seattle. Check out the 5th Avenue and Paramount. Wow!

from Phila Inquirer obit online today- Harry Jay Katz, who had been a Philadelphia fixture for a half-century, died Tuesday at Einstein Hospital in Elkins Park. He was 75 and had been admitted a few days earlier after several months at the Hillcrest Center Nursing Home in Wyncote.

Death was from natural causes and he died peacefully, his family said.

Although he was independently wealthy, and was often called a “playboy,” Katz dabbled in a number of ventures, not all successful, rather than just sit on his wealth.

His biggest accomplishment was reopening the magnificent Erlanger Theater at 21st and Market Streets in the late 1960s as a nightclub, café and venue for theater productions.

In the early 70’s Patti LaBelle appeared here and a production of Jesus Christ Superstar. Patti LaBelle came down Market St in a horse and carriage