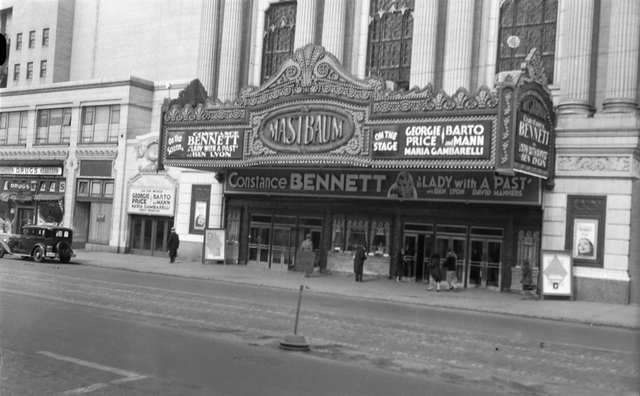 Located at the northwest corner of N. 20th Street and Market Street. The Mastbaum Theatre was the largest and most lavish movie palace ever in Philadelphia. With 4,717 seats, it was the 8th largest, and one of the grandest in the United States. Its grandeur impressed Hollywood studios, and helped put Philadelphia on the national movie map for releases. It was also a ‘White Elephant’, closed more often than it was open. It was too huge and expensive to operate, and a bit too far away from the subway.

Jules Mastbaum, president of the Stanley Company, planned the Jules Theatre, but he died. Warner Bros. took over the Stanley Company and with Philadelphia theatre architects Hoffman-Henon Co., built the Mastbaum Memorial Theatre in his memory.

Costing five and a half million dollars to build, the Mastbaum Theatre’s interior was incredibly lavish, with marble, murals, gold leaf, leaded glass, tapestries, statues, paintings, and Czechoslovakian and other crystal chandeliers. A Carriage Lobby led to the Grand Lobby, which had a Fountain Lobby. There was a Grand Foyer, a main lounge downstairs, and elevators to all 8 levels. The auditorium had three balconies, a 4-manual Wurlitzer organ which was opened by organist Stuart Barrie, and both the largest chandelier and the largest fire curtain in Philadelphia. A detailed description by Irvin R. Glazer appeared in Marquee Vol 7, No 1(1975) of the Theatre Historical Society, republished in Vol 37, No 2(2005).

The February 28, 1929 gala opening presented stage entertainment, the world premiere of the Warner Bros. movie “Sonny Boy” starring Davey Lee, a 75 piece pit orchestra, a choral ensemble of 50 and a corps de ballet of 32. At times, the Mastbuam Theatre packed them in, but overall lost money because it could not bring in large enough audiences compared to the size and costs of the place. Opera was the policy in 1933. In 1934, Samuel L. Rothafel, “Roxy” was brought in to attract audiences, but within 2 months the theatre closed.

The Mastbaum Theatre seldom opened again during the Great Depression, until World War Two when military expenditures saw many people employed in Philadelphia. In September, 1942, the movie “Tales of Manhattan” reopened the Mastbaum Theatre. The balconies were usually closed, but movies were shown with Irving Berlin’s “This is the Army” having its premiere here and a sold out run, in 1942. Occasional stage shows featured Eddie Fisher, Dean Martin and Jerry Lewis, and Judy Garland. Among popular movies shown were “Casablanca” in 1943, “Going My Way” in 1944, “Quo Vadis” (which had a ten-week run) and “African Queen” in 1952, and Hitchcock’s “I Confess” in 1953. With John Garfield appearing, “Pride of the Marines” had its world premiere in Philadelphia, in August, 1945, with first a private screening in the Bellevue Stratford Hotel ballroom, and then opened to the public at the Mastbaum Theatre. “The Bells of St. Mary” was such a popular film in 1946 that it became ‘standing room only’. In the summer of 1950, star Wanda Hendrix appeared at the Mastbaum Theatre to promote her film “The Admiral Was a Lady”. “Tripoli” had its world premiere here (concurrent with a cinema in both Tokyo and Seoul) on October 13, 1950. On May 23, 1951, star Eveyln Keyes appeared on the Mastbaum Theatre stage at a world premiere of the film noir “The Prowler”.

After television arrived in homes, the Earle Theatre, known more for live shows than for movies, was the first downtown Philadelphia movie palace to be demolished, in 1953. The Mastbaum Theatre was next, closed and demolished in 1958. By then, for the CinemaScope era, the screen was 60 feet wide. The proscenium chandeliers went to the Locust Theatre. The Mastbaum Theatre site lay vacant for almost 20 years, until One and Two Commerce Square office towers were built in the late-1980’s and early-1990’s. Half a century after its demolition, people who visited its interior still recall the Mastbaum Theatre as the most impressive movie palace ever built in the Philadelphia region.

Most likely it was a souvenir. “Ten Cents a Dance” is about a woman who was what was known as a taxi dancer (played by Barbara Stanwyck in the 1931 film; there was another film by the same title made in 1945). At taxi dance halls, men would buy tickets or tokens to buy a dance with one of a group of women hired by the hall; usually one token or ticket bought a dance lasting the length of a song. Such establishments were mostly gone from U.S. cities by the end of WWII, though a rather sleazy one plays a role in the musical “Sweet Charity.”

Click here for an exterior view of the Mastbaum Theatre in 1932.

I knew a guy who played the organ at the Mastbaum and other movie palaces of the time. He was a classically trained pianist and also played for President Truman. He has been gone for many years. He sounded like W.C. Fields when he talked.

Series of the grand opening ads from February 21-28, 1929 in the photo section. The 28th can also be seen at https://philly.newspapers.com/clip/6943145/mastbaum_theatre_opening/

In 1955 Disney combined the three Davy Crockett television episodes into the theatrical film “Davy Crockett, King of the Wild Frontier.” It played at the Mastbaum. I saw it with a live appearance by Fess Parker and Buddy Ebsen who also sang the famous “ Ballad of Davy Crockett.” 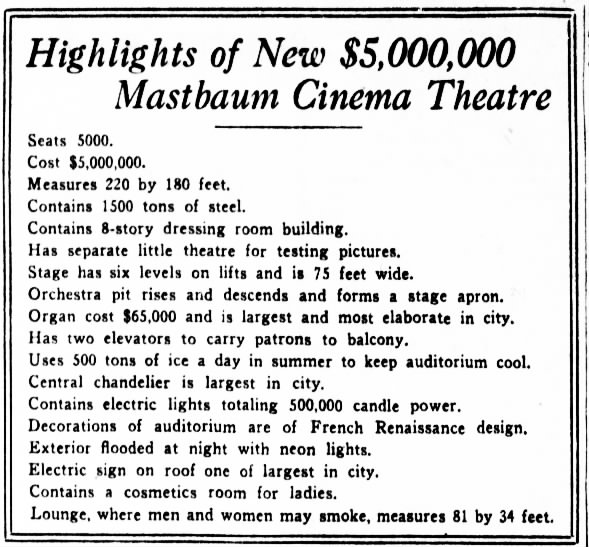 I sometimes wonder if the many city officials who signed demolition orders of these similar outstanding buildings for the almighty $ are resting in peace.