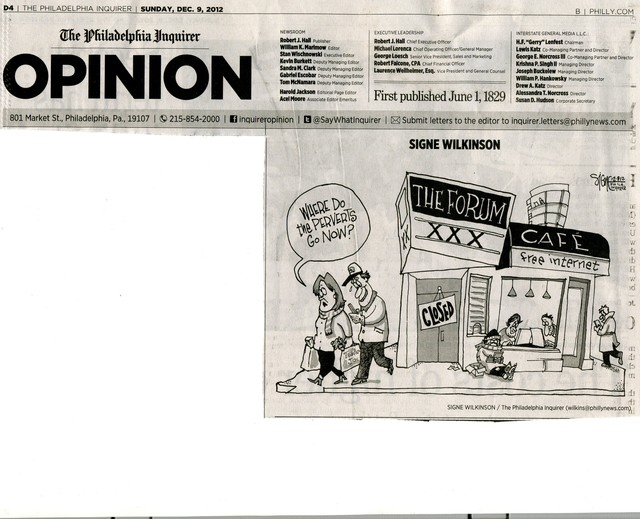 The November 2007 edition of Philadelphia magazine had an article about the experience. According to the article, tickets in 2007 were $7, there are snack and drink machines, and while watching the movie, fellow ticket buyers, who are all males, straight and gay, will often….well, I don’t want to get graphic, so I’m going to leave it to your imagination - or read the magazine.

In the first week of December 2012, the Forum Theatre was closed. Due to neighborhood opposition, the city had refused permission for the owners to expand the Forum Theatre to accommodate the ‘Les Gals’ venue, located a block away, which also closed around the same time.

In February 2013, the owner had the Forum Theatre demolished for parking spaces, and whatever redevelopment eventually occurs.

Here is another photo:
http://tinyurl.com/yjym9vq

Philly.com story on the closing. The landlord had moved to evict the theater for nonpayment of rent.

I would like to see this still used as a theater, cleaned up of course. Could be the new Temple Cinemateque. I haven’t been in that theater in thirty years. Was then a couples theater, a clean safe place. With the Book Bin and John’s Adult Books closing this year as well, The Scorpio and Danny’s will make bank, because everyone doesn’t have internet access.

A New York Daily News story about the closing and the theater’s owner can be read here.

Well the Forum has a date with the wreckers, soon it will wiped off the face of the earth.I wanted to buy the admission price sign, but it was gone. It was my landmark on the Septa train, I will miss it, even though it was 30 years since I had been in there.

Maybe a good place for a Alamo Draft House could be the lot where the Forum once stood.

This opened on July 14th, 1972. Its grand opening ad can be seen in the photo section for this cinema.

Sure do miss these types of theatres whether it’s the Forum in Philly or some place else.