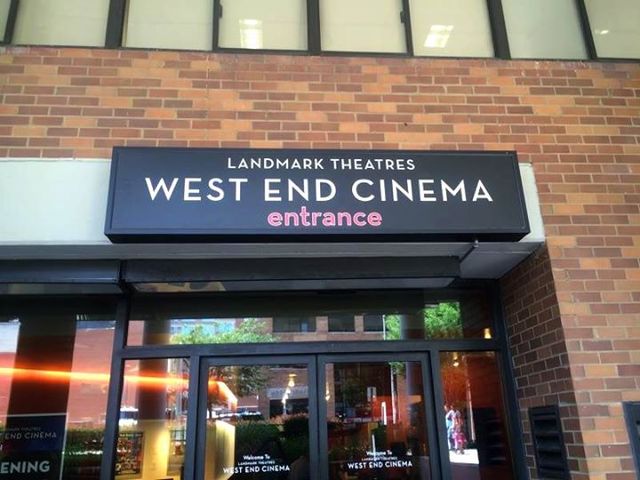 The Circle West End 5-7 opened on April 12, 1985 with three auditoriums and “Blood Simple”, “Carmen” and “A Sunday in the Country”. The Circle circuit already operated the Circle West End 1-4. Loews Cineplex took over when they purchased the Circle chain in late-1987. Loews Cineplex remodeled it and renamed it the Inner Circle Theatre in memory of the late movie theatre of that name on Pennsylvania Avenue. It was still a triplex. It was closed in late-2003 or early-2004.

Renamed West End Cinema, it reopened as an art house on October 29, 2010 with “Howl”, Budrus" and “Gerrymandering”. Auditoriums seat 100, 95 and 63. It was mothballed during the time it was closed, with projector systems, platters, sound systems, screens, seats and concessions remaining in place. It was closed by Loews Cineplex on March 31, 2015 due to increased competition by movie chains. It was reopened by Landmark July 17, 2015. It was closed on March 16, 2020 due to the Covid-19 pandemic. Sadly, the closure has proved to be permanent.

Westendcinema, have you taken a nice photo ofthe front of the theater? please post as Profile photo here now that photos can be added again. And, if you have a nice photo from before you tookoever, post that, too. Thanks

How are the three auditoriums configured? The one closest to the entrance appears to be fan shaped.

“Josh Levin noted that the exhibition landscape has radically changed since the West End opened just before Halloween in 2010. The Austin-based Alamo Drafthouse and Cinema opened an outpost in Ashburn, the Angelika opened its Mosaic theater in Fairfax and a pop-up theater at Union Market, and the high-end ArcLight and iPic theaters opened in Montgomery County. With more theaters planned in the area, including a permanent home for the Angelika pop-up and two new Landmark theaters near 14th and U and in NoMa, Levin noted that “we simply won’t be able to compete for the same quality of films that we’ve been showing. So the only rational decision, as much as I hate to have to come to this conclusion, is to close.”

Levin, who also produces documentaries, said he has a new film coming out this summer, but has no long-term plans past that. “I have loved doing this,” he said. “And I will take some small comfort in the fact that the rationale we had in opening the West End, which was that so many theaters in D.C. had gone out of business that we felt there was room in the marketplace, that that trend has reversed and we have wonderful new theaters. As a film fan and somebody who believes in the importance of having that experience in a darkened room with other people on a screen that’s larger than your cell phone, I’m excited for the future of exhibition in D.C.”

Although regular programming at the West End will cease on March 26, Levin said he hopes to “do something fun” at the theater the following weekend, before it closes for good on March 31.

Hmm. Why would Landmark spend $ on such an old place? How much larger of a movie screen can you put in those shoe box theaters anyway? I doubt it’ll big enough for 70mm. :P

Wow, how time has passed since it reopened in 2010 and closed this year.

I wish them well.

Now, if only Landmark would reopen say, the old MacArthur theater, which is also a triplex, but has a huge 700 seat BIG auditorium that could play 70mm on a large screen. But how to get rid of CVS?! Their lease should be up by now. Its been 18 years..gotta go.

looks like Landmark is closing the theater until April – “We’re renovating to enhance your experience! With New Screens, Supple Leather seats, & more!”

I was over here for the Oscar Doc Shorts showcase on screen 1, and personally it didn’t look like they did anything to the screen or the seats

re(re)opening tomorrow April 1st – showtimes are up on the theater’s website.

both auditoriums have the new seats and a quick look into auditorium two, the spacing also looks resolved.

Up from 1998 to its closing, it’s was part of Loews Cineplex.

another economic casualty of the COVID pandemic; I drove by this the other day and every sign and everything inside the glass doors is gone, this theatre is officially closed. DC, yet again, loses another movie theater