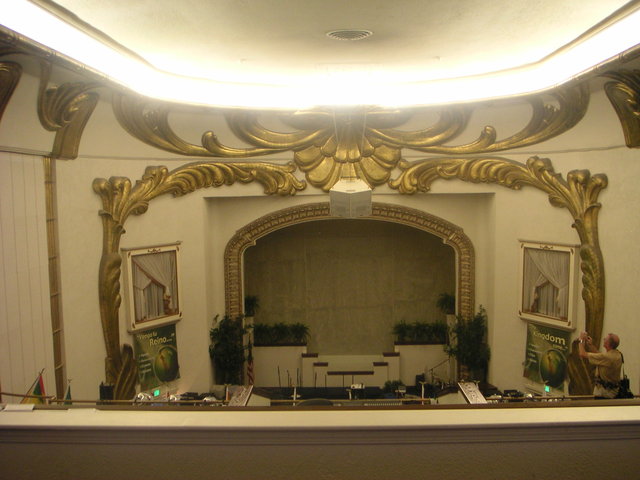 The Fox West Coast Theatre has the distinction of being the 100th theatre designed by the Boller Brothers. Charles E. Walker built the New Walker Theatre at a cost of $250,000 on the site of the old Princess Theatre. Construction was completed in record time with three shifts working around the clock. The original 1,355 seating capacity included 800 on the main floor, along with 55 loges and 500 in the balcony, which was tested with a 25-ton cement weight. The theatre opened in January 1924, with a Wurlitzer pipe organ installed, and the opening attraction was Will Rogers in “Two Wagons, Both Covered”.

By 1950 it was operated by Cabart Theaters Corp. In the late-1950’s, the interior of the theatre was given a ‘Skouras-style ornamentation, similar to many of the Fox West Coast theatres at that time. The theatre was closed as a movie theatre during the 1980’s and fell into disrepair. In 1991, the Christian Tabernacle bought it for $750,000 and put another $50,000 into its restoration. Pete Montanez, a church member and general contractor, gave up two years of his time and donated $200,000 in labor to restore the theatre. He did all this work, despite the handicap of previously losing his right forearm in an accident.

The building was placed on the National Register of Historic Places in 1982.

Some photos from the Santa Ana History site :

Actually, now that I look at it again, the second mystery photo probably says wATER instead of theATER. But what would the Santa Ana Theatre have been? It looks like 1910s, which would make it too old to have been Clune’s Santa Ana/Yost.

The first “mystery theatre” picture, is the Santa Ana Theatre (also billed as the Santa Ana Electric Theatre), which was located on east 4th street. The theatre was operated by “Doc” Roberts (he’s the man standing on the far left hand side of the photo). The Santa Ana library dates the theatre opening/picture to 1908, while the City of Santa Ana lists 1906; in either case, this would make the Santa Ana/Electric Theatre the first commercial movie theatre in Orange County, predating the Temple Theatre (which has traditionally been billed as the first) by a year or two.

Here is a March 2009 photograph I took of the West Coast Theatre:
View link

Thanks for redoing the introduction. This is a photo circa 1959 that is currently being advertised on eBay:
http://tinyurl.com/oggh6k

Here’s a 1926 playbill from the West Coast Walker:
View link

Remember this theatre, when I was a kid—late 60s, and on. Always ran movies that were well past their expiration date, you could say. ALways recall, the floors were sticky, seats always had gum on them, and overall, the theatre was simply filthy.