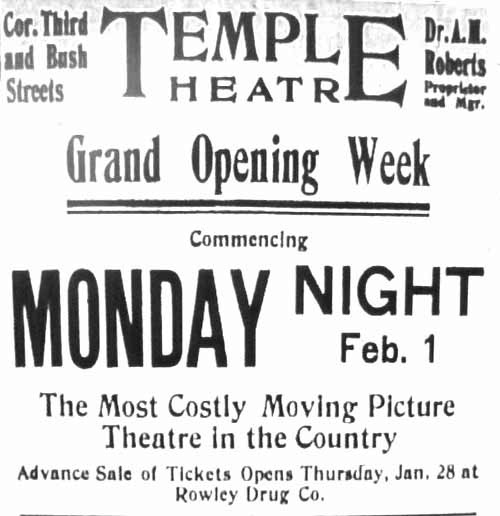 Located at the corner of N. Bush Street and E. 3rd Street. The Temple Theatre opened on February 1, 1909, at a cost of $15,000, making it the first theatre in Santa Ana and Orange County. L.A. Schlesinger, its then owner, closed it in July of 1915 to make way for his West End Theatre in Santa Ana, which he described as being “especially designed for the showing of cinematography productions”. Over the years, according to newspapers archives, the Temple Theatre was opened and closed many times.

On September 24, 1936 its grand opening as Walker’s Theatre was announced in the Santa Ana Register. Charles Walker, veteran Santa Ana exhibitor, and his son Victor did a $75,000 remodeling which included the lowering of the floor. The result was an 884-seat house whose streamline exterior complimented the Art Deco style City Hall next door. Even the backs of the seats were streamlined with chrome bars to make them easy to see in the dark. Its opening attraction was Shirley Temple in “Poor Little Rich Girl” and a Joe E. Brown second feature.

Around 1957, according to Santa Ana Register archives, Cabart Theatres was undergoing financial difficulties and defaulted on a loan on their local State Theatre. Charles Walker regained control over the State Theatre and remodeled it for first-run films but it appears that the Walker Theatre never reopened.

A newspaper article on December 6, 1962 said that the Walker Theatre was purchased by the city and was being demolished to make way for a City Hall parking lot. A photo of its demolition, which was to be completed by March 19, 1963, appeared in the Santa Ana Register on February 10, 1963.

I’ve been unable to find the name of the architect who designed the 1909 Temple Theatre, but the August 2nd, 1935, issue of Southwest Builder and Contractor contains an article saying that the architects who prepared the plans for remodeling the theatre for C.E. Walker were Austin & Wildman, of Santa Ana.

Charles V. Walker and his son, Victor M. Walker, Orange County theater owners for the past thirty five years, announced that ownership of their four Santa Ana theaters would be assumed by Milton B. and Harry Arthur, owners of the Cabart Theater Corp.

The Walker’s, State, Yost and Princess theaters transaction represents one of the largest major business deals ever made here although no consideration was announced pending completion of escrow proceedings.

George A. King, president of the Santa Ana Chamber of Commerce and manager of the five West Coast theaters in Orange County, is a brother-in-law of the Arthur brothers and has represented the family interests in Orange County. The late Harry Arthur Sr. was a long-time theater operator in Anaheim and his sons have extensive theater holdings, with head offices in Long Beach.

The Walker Theater at 3rd and Bush Streets will be demolished under a $3300 contract which the city has with Walter Hesse of Gardena.

I was born (1945) and raised in Santa Ana and remember the Walker, West Coast, Broadway, Yost and State theatres well. I attended many Saturday shows at the Walker and West Coast, admission was 10 cents or two Bubble Up bottle caps. The West Coast is now a church. The Yost was always Hispanic during my tenure in Santa ana (1945-1968). The State was basically used for storage. I went to grammar, junior high and senior high (SAHS) schools with Chuck Walker (graduated 1963 SAHS)of the Walker dynasty. While at a SAHS reunion in 1973, Chuck said he owned the Wagon Wheel bar in Costa Mesa. Chuck, are you still around? Contact me is you want.

My dad was the Victor M Walker mentioned above (I am Victor M Walker Jr.), and Chuck Walker is my half-brother. I grew up in Santa Ana, and remember the State Theater. I visited the old Walker Theater a few weeks before it was demolished. I would have been 10 then. Good memories.