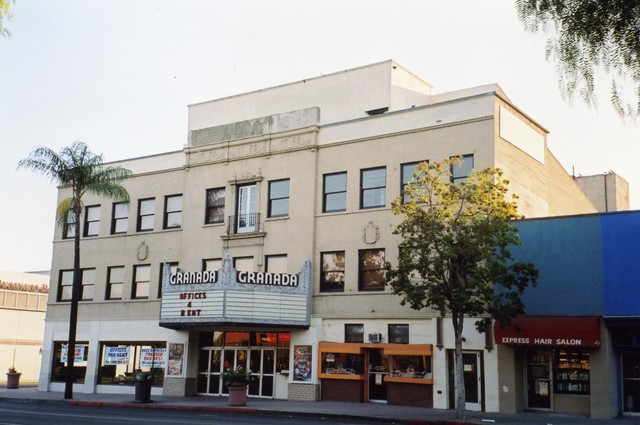 Built in 1926 to the designs of noted architect L.A. Smith, the Granada Theatre was leased to West Coast Junior Theatres and by 1931 was part of Fox West Coast Theatres chain. The Granada Theatre was still open in 1968. It became a church in the 2000’s but they have since vacated the building. In 2016 it was taken over by the Inland Conservatory for the Performing Arts.

Jacob, is there any way of getting a schedule of films?

The Ontario Public Library has a section down in the basement full of old news papers. I once saw a bunch of stories and pictues of the Granada from the late 20’s. I’m sure one of the pictures has the box office in it. One day while changing ligh bulbs at the Granada, one of our guys jumped up on the candy counter and put his butt right through the glass top. We all panicked and ran to the nearest glass store and bought a new piece of glass. No one said anything and it went un discovered for a long time until one day someone was cleaning and saw small shards of glass in the corners of the counter below the glass top. It was our secret. Pat C.

I grew up in Ontario from 1952 to 1971. I actually worked at the Granada Theatre when I was a teenager in the late 60’s. I was an usherette and candy girl. Loved to shock the kids neckin' in the back row with my flashlight. Can’t say I wasn’t one of them in my younger day. The interior of the theatre was pretty amazing even back then. Was friends with the Albrechtâ€™s who owned the jewelry store next door. In fact, my future husband got my engagement ring there and stayed with them when he was in visiting me from L.A. I only remember the Ritz Theatre, which was located on the east side of Euclid. But, as far as I remember they were both legitimate movie houses, not a porno theatre. I ended up moving over to work at the Fox Theatre in Pomona. I was the cashier in the box office outside, when it was a real â€œboxâ€ office in the forecourt. Used to get phone calls from wierdos across the street at the rundown Orange Hotel, talking dirty and telling me they could see me from their windows. Probably why they eventually moved the box office inside. Left Ontario in 1971, but eventually came back to my roots.

Hey, AllieE. When did you work at the Granada? I worked with Sue Hoppy, Terry La Porte, Mike Pruitt, Connie Hoppy , Nancy Deecey and some I can’t remember. Pat C

Pat C. ~ great memory to remember those names after all these years. I don’t remember any of my co-workers or manager. I had to have worked there 1967-68. But what I do remember is selling and eating my favorite candy at the theatre and that was…“Flicks”. Chocolate wafers made by Ghirardelli and they sold for a whopping 5 cents!

AllieE. I liked the candy also, but not the hot dogs. It would be fun to have a reunion of all the people who worked there over the years. I drove by the place today and it really looks funny with out the box office, even though I know the box office has been gone for a long time. Maybe some day. Pat C

My name is Dylan I and a few others currently work with at the Granada. The Church who bought it Centro Diplomatico lost it and owed quite a pretty penny on i, and it is now now under the control of a bank. Myself and a group of my friends along with the current building managers are working on restoring the Granada to its original form. We will be holding an event there August 7th for those interested. We are a group of 1930s and 40s enthusiasts intent on bringing glory back to this old gal. We are looking for past employees to come by and give us advice on what it looked like back in the day. please call the numbers at the bottom of the attached flyer. We want to talk to you very much!

There are some late 2008 photos on this site:
View link

Hi,we just saw Some Like it Hot with Tony Curtis and Jack Lemmon Friday nite – you can see how beautiful the theatre must have been in it’s hey day – I believe they’re showing Abbott and Costello meet Frankenstein this Saturday night – tickets were only $3! Hoping they’ll be able to have enough interest to keep it going.

Who could forget the Granada’s “Free Show” on Saturday mornings? You could go to various merchants in town, Butler Brothers Department store being one of them..and get a ticket for a free show. The shows started at 10:00AM and featured maybe a half a dozen cartoons…plus a full length feature. I believe they also ran several serials. It was a great way to meet all your friends from school and have a very enjoyable coupe of hours.