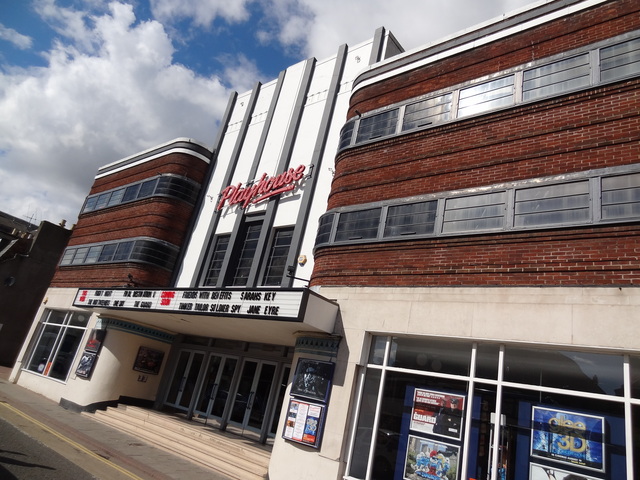 Built for a local company, the Playhouse Cinema opened in 1933. Soon after opening it was taken over by Caledonian Associated Cinemas Ltd.(CAC) and became the flagship cinema of the circuit.

There is a central three storey tower feature over the entrance which is faced in white stone. Flanking on each side are matching units which contained a shop. Inside the auditorium the seating was arranged in stalls and circle and has many Art Deco styled details. The proscenium was 30 feet wide. There was a cafe located in the first-floor foyer.

The Playhouse was tripled in the late 1970’s with the former circle seating 469 and the two mini-screens underneath in the rear stalls seating 169 and 144. Later the former cafe was converted into a 56 seat screen. A fifth screen was built on the former stage and front stalls area which seats 127. In 1999, a new building was erected at the rear of the stage and two more screens were added to the complex, each seating 130.

It is still operated by a company which derived from the old CAC and remains a popular cinema for the town.

On 20th March 1991, Historic Scotland designated the Playhouse a Grade B Listed building.