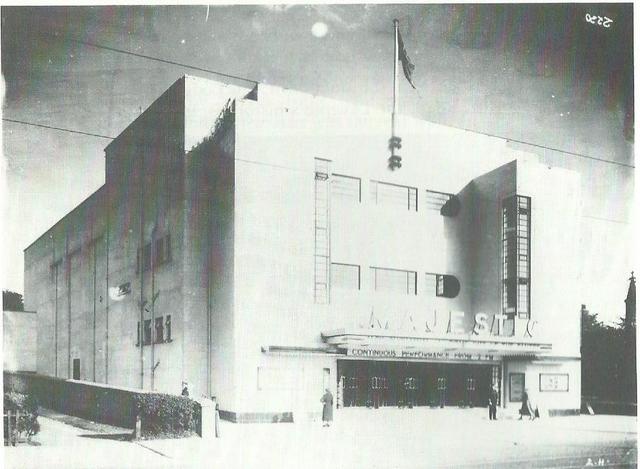 Located in south Belfast, the Majestic Cinema was built for an independent, but was sold to the Union Cinemas chain. It opened on 25th May 1936 with Shirley Temple in "Curly Tops".

The cinema certainly lived up to its name. It was designed by Belfast architect J. McBride Neill in an Art Deco style. The exterior was of cream faiance tiling and had two side towers, which flanked the central recessed main elevation. There were vertical windows on the inner corners of the towers and two sets of three windows on the recessed elevation. The name ‘MAJESTIC’ was mounted in large letters across the top of the canopy. Inside the auditorium seating was provided for 1,000 in the stalls and 369 in the circle.

Union Cinemas were taken over by Associated British Cinemas(ABC) in October 1937, and ABC continued to operate the Majestic for the remainder of its cinematic life.

The Majestic Cinema closed on 4th October 1975. It was converted into a retail furniture store known as ‘Ideas In Furniture’. It was purchased by a church in June 2015 and is due to open in November 2018.

The Majestic was designated a Grade B Listed building by the Enviroment and Heritage Service, but the building has now been De-Listed.

The cinema is being converted into a church by the new owners the Windsor Baptist Church which has outgrown its current home. It was purchased in June 2015 but not expected to be ready until November 2018. More info on the conversion here: http://www.wbcometogether.org/

RCA photophone was the sound system.