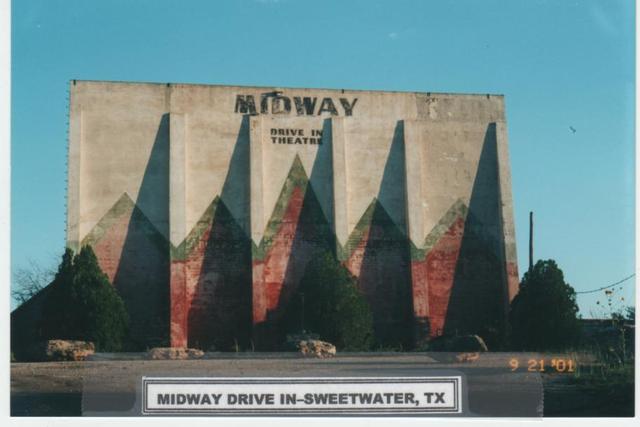 The Midway Drive-In opened on May 20, 1948 with Dennis Morgan in “The Time, the Place and the Girl”.

The Midway Drive In, just outside the city limits of Sweetwater, Texas, was owned by Jack Wallace back in the fifties. His son, J. D., and his wife, Dorothy, ran the theater, and the projectionist at the time was Billy Faught. My father was an avid movie goer, and we were there seventy five percent of the time in the summer. The ticket office was several yards from the the snack bar, and you could stop on the way in and be served from the drive through window, and J.D. could walk out the door if he suspected someone sneaking in with a trunk load of teenagers. A large playground and outdoor seating area was a parents dream. They could sit on the front row and watch the movie, and keep an eye on the kids at the same time. I can vividly recall the layout of the drive in, and
miss those days where I played on the swings with my friend Jamie, the Wallaces daughter.
Jack also owned an indoor theater in Roscoe in the early fifties, called the Joy. The building is no longer there. My niece and her husband own the old Midway Drive In lot, where they moved in a trailer house, and live there.

This drive-in is located on the northwest corner of the intersection of E. Broadway St. and State Loop 549.

It appears to be fully intact with screen, ticket office, and concession stand building as seen on Google Earth with 2008 imagery.

The one on E. Broadway appears to be the Rocket Drive In. Google Earth shows the Midway at 840 W. State Loop 432 Sweetwater, TX United States. Street View confirms the Midway screen at that location on the West end of town.

I lived in Colorado Springs with my brother and his family in the summer of 1991. One day we drove to Sweetwater “yard selling”. On the way back, we saw this huge monolith. It was amazing, I had seen a few of these deserted drive inns this summer in Texas, but my brother stopped at this one and we started looking around. I remember the playground and quite a few of the wooden chairs for the outdoor seating. My nephew and I went inside the tower screen. There was a lot of birds nesting (Hitchcock would’ve been proud) and a lot of rat droppings everywhere! Up one set of stairs we found a huge poster for the 1970 movie “Love Story” pasted onto a piece of plywood. I dutifully brought my sovenier down the stairs and placed it in the back of my brothers van. Awesome day!

Just added to Photos Section. Photo & copy courtesy of the Fifties Fun Facebook page. Sweetwater Texas The 230-car capacity drive-in was opened in the 1950s and like many drive-ins of the era, provided a large playground for kids and an outdoor seating area for families in front of the screen.