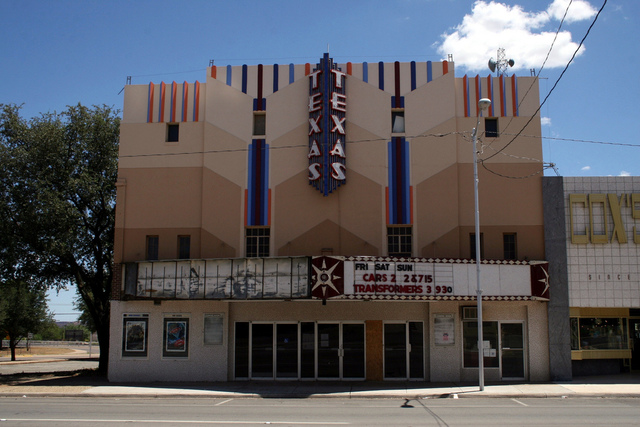 Opened December 4, 1935, this large theatre became a bit shabby, but still in operation. It had been twinned and was showing two movies when I photographed it in 2003. The street level suffered an unfortunate facelift at some point, perhaps the 1960’s, that left it covered in tiny multicolored tiles, with a glassed in lobby. The upper stories are vintage, and the concrete facade has an interesting chevron pattern to it.

The Texas Theatre was in continuous operation until sometime in 2005, when the owner closed it. It remained closed until 2009, when a group of Sweetwater folks organized a group called Sweetwater Texas Theater Acquisition & Renovation (S.T.T.A.R.). It has 501©3 status. The group purchased the theatre in 2010, and began renovation. Films are now screened on a part time basis. S.T.T.A.R. are also seeking assistance in the funding and the original design specs, and any help would be appreciated.

My photograph of the TEXAS.
www.flickr.com/photos/lastpictureshow/310685002

A cold, snowy day view of the Texas Theater in Sweetwater showing “Enemy Mine” and “Black Moon Rising” taken in 1986.

A view from 2009 of the Texas in Sweetwater with a recent face lift here and here.

The Sweetwater Texas Theater is to re-open on the date of the premiere of Iron Man II.

At least someone fixed up the facade and made it presentable. It looked so neglected before.