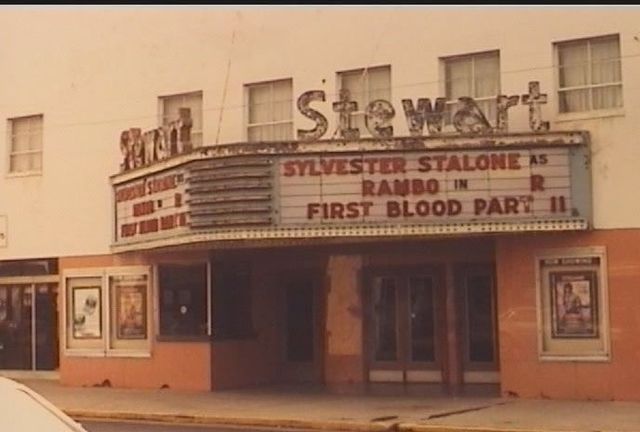 The Harnett Theatre was opened in 1940. It was still open in 1956, but had closed by 1957. It reopened as the Stewart Theatre, operated by the Stewart and Everett chain. It closed in the late-1980’s.

The Harnett site was working yesterday. I put it in as a related site, but I guess the editor couldn’t get it to load either and left it out.

Here is another photo:
http://tinyurl.com/yhf6eca

Should you ever need a volunteer projectionist to raise money through film presentations, I’d be happy to volunteer.

Chuck 1231: This theatre operated as a first-run movie house from its opening in 1940 until its closing in the early-to-mid 1980’s when it was under the Stewart & Everett chain. From 1940 thru 1955 it was the Harnett Theatre and from 1955 until its closing in 1987 or 1990 was the Stewart Theatre. From 1940 until 1975,it was in fact the only single screen indoor movie theatre in town,and the only movie house in all of Downtown Dunn and Harnett County. The Plaza Twin theatres changed all that by 1975,not to mention the town had the only drive-in theatre too which is NOT listed on the Cinema Treasures site. By the late-1980’s or mid-2000’s it changed hands with it became The Harnett Regional Theatre.

I understand that there was a small theater in Lillington at approximately where the Hardees is located at one time. I suspect it may have been a part of the defunct Jerry Lewis chain (actually a franchise). It is too bad that there aren’t any drive ins left but I suppose they would be much more hazardous to manage these days. Thanks for the input.