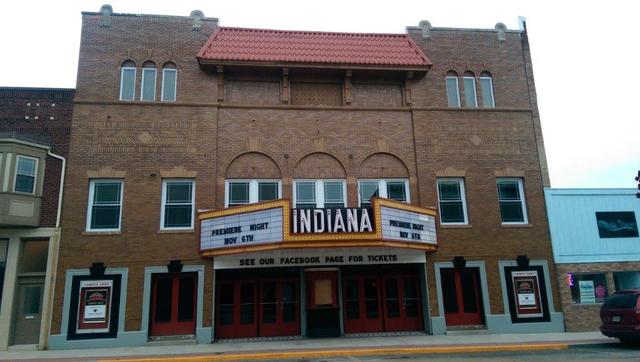 Built on the site of the Grand Opera House which was destroyed by fire on January 11, 1926. The Indiana Theater opened October 6, 1926. It was closed by AMC in December 2011. In May 2012 it was taken over by Friends of the Indiana Theater and KJB Theaters took over in June 2014. After renovations and restoration, it reopened on November 6, 2014.

AMC closed it around Christmas. There is a local movement to get it opened again, though. But for now, the marquee is blank and the entry boarded. Good luck to them!

Friends of the Indiana Theater is working hard to secure ownership of the building and reopen in the future. We are hosting a block party/fundraiser on March 17th, 2012. More details can be found here: https://www.facebook.com/#!/groups/174396455987193/ It is my belief that AMC purchased our theater with the intent of closing it after the mutiplex in Vincennes, which is what happened. AMC has a monopoly, at least in our area.

This web page says that the Renaissance Revival facade (it looks mostly Italian Renaissance to me) was put on the building in the mid-1920s. I would imagine that the interior was rebuilt at the same time, or earlier. The Opera House was a second floor theater, and few of those survived long as movie houses. Those that did had almost invariably been rebuilt as ground-floor theaters at some point, and the Indiana was probably no exception.

Update: This theater was recently purchased by KJB Theaters, who in recent years purchased and converted to digital The Paris Theater in Paris, IL. Renovations and repairs are currently happening, and the theater expects to re-open with All Digital Projection and Sound in the Fall of 2014!

Fully restored with all-new digital projectors, the Indiana Theater will re-open November 6, 2014. Given the historic significance of the Washington, Indiana theater, the re-opening has attracted considerable media attention. The following local story was picked up by the Associated Press and appeared in the Indianapolis Star (and other media).

The article MKtchamp linked to says that the Indiana Theatre opened on October 6, 1926. The Opera House built in 1892 was destroyed by a fire earlier that year, as reported (without the theater’s name) in the January 12, 1926 issue of The Film Daily:

“Washington, Ind. — Fire destroyed a local house, causing a loss estimated at $150,000. Nearly 1,000 persons were in the theater when the fire started but all filed out quietly.”The Janauary 11, 1926, issue of The Indianapolis News reported that the damage to the Grand Theatre, formerly the Grand Opera House, been extensive, with walls collapsing into the street and through the roof of an adjacent building. Because of the extent of the damage it seems unlikely that much, if any, of the structure of the Opera House remained to be incorporated into the Indiana Theatre. Perhaps we should consider the Grand Opera House/Grand Theatre a separate house rather than aka’s for the Indiana Theatre?

The Indiana Theatre was built for the Switow chain of Louisville, Kentucky, and operated by them for many years. The “Theatres in Construction” column of the May 5, 1926, issue of Variety had this item about it:

Carl J. Epping was around this time president of the Kentucky Chapter of the American Institute of Architects. It’s possible that he designed other theater projects for the Switow interests, but I haven’t been able to track any down.

Located in Washington, IN, and Paris, IL, KJB Theaters is proudly owned and operated by Terre Haute, Indiana native and 20 year theater veteran Brent Barnhart. KJB Theaters was established in December 2011 and has since grown to now include two theaters in Indiana and Illinois. His first theater, “The Paris Theater”, is a two screen movie theater located in Paris, IL that reopened December 12, 2011 to lots of fanfare. His second theater, “The Indiana Theater”, is located in Washington, Indiana and is a newly renovated two screen movie theater that reopened November 6, 2014.

KJB Theaters operate as “First Run” movie theaters, meaning they receive movies on the national release date. All films are presented in All Digital Projection & 5.1 Dolby Digital Surround Sound. Both theaters are known for being very family friendly with unbeatable admission and concessions prices. Every summer KJB Theaters puts on its Annual FREE Summer Kids' Films, a ten week series of family friendly films. Due to generous local businesses, admission is free for everyone! This event has drawn between 6,000 & 7,000 patrons every summer in Paris alone!

KJB Theaters is known for its smiling, friendly staff and affordable prices. For additional information, please check out the Paris Theatre or Indiana Theater sites. Also, feel free to like us on Facebook for more information!