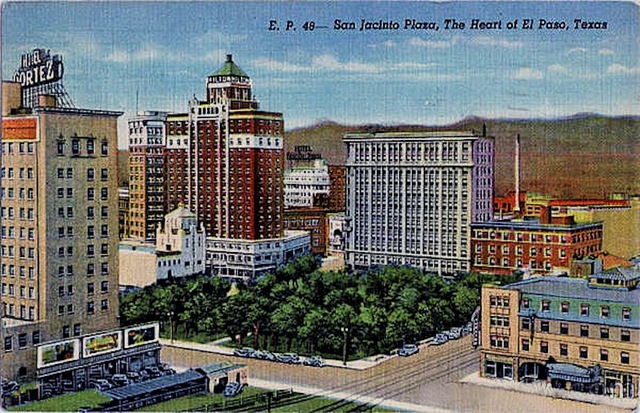 The Crawford Theater opened October 4, 1906. It was closed in 1922. It was reopened December 14, 1929 with a stage revue “Meet the Folks” presented by Wilbur Cushman. It was closed on March 31, 1964. It was almost immediately demolished, together with the adjacent Angelus Hotel.

I used to frequent the Crawford when I was a young GI stationed at Fort Bliss during 1961 and 1962. The theatre was way past it’s glory days by then, somewhat of a flea pit dump in fact. An occasional rat would scamper across the aisle and apparently it was best to keep the houselights out at all times with a grind house policy of continuous shows with no intermissions. The balcony appeared to be closed permanently. The price was right though, about 50 cents for matinees as I recall and not much more that that in the evening. The programming was second run double features with two changes a week, new shows on Sunday and Wednesday.

Presentation wasn’t too bad at the Crawford though and this was before grind houses became to be primarily occupied by druggies, winos and escapees from mental institutions. The Crawford helped me keep up on current flicks on my Army meager Army paycheck budget. We had two very nice theaters at Fort Bliss with current films, four single feature program changes a week and 25 cent admission but the boneheaded post commander decried that us GIs had to wear coat and ties or uniforms to attend (what nonsense!). Most of us in turn boycotted the post theaters and headed downtown to see our flicks. The first run Plaza, State and Capri were preferred but sometimes there was just a better program at the cheapie Palace…or the Crawford. At other times, usually towards the end of the month, the Palace and the Crawford were all you could afford! I actually look back on those days (sort of) fondly now.

Crawford Theatre! Was always a dump, but fun to go there with my rowdy friends. Occasionally you could hear the train as it puffed along (steam engines in those days) a track to the side of the theatre. This was the in the 1940’s. Even after they sunk the railroad track down below street level, you could sometimes still hear the train.

EL PASO, April 7-The City Council has ordered the partially completed Crawford Theater razed to the ground and rebuilt thoroughly fireproof and with stronger walls, alleging that the former construction was a firetrap.

A good description of The Crawford is in Cynthia Farah Haines' “Showtime! From Opera Houses to Picture Palaces in El Paso (Texas Western Press, 2006).

This opened on October 4th, 1906. Grand opening ad in the photo section. 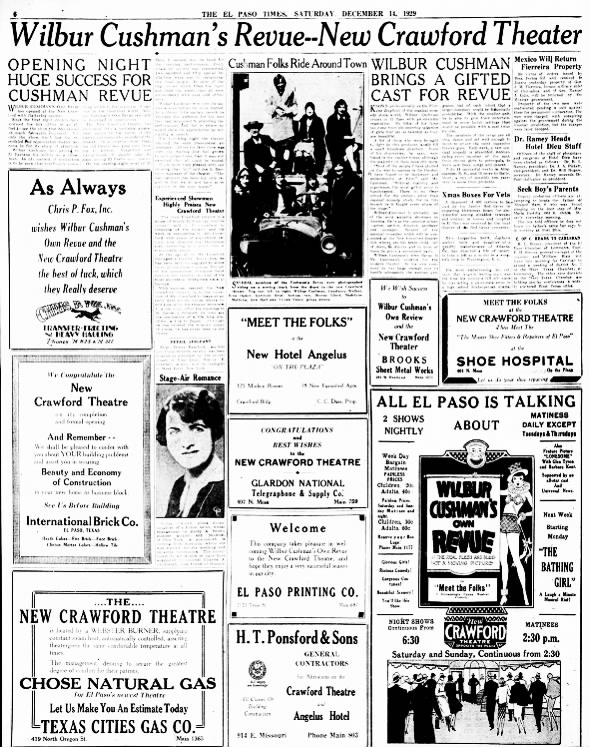 Closed at the end of a leasing period on March 31, 1964 with a double feature of Otto Preminger’s and “Queen of the Pirates.” following a nearly 60-year run. The Crawford and neighboring Angelus Hotel were bulldozed days later.