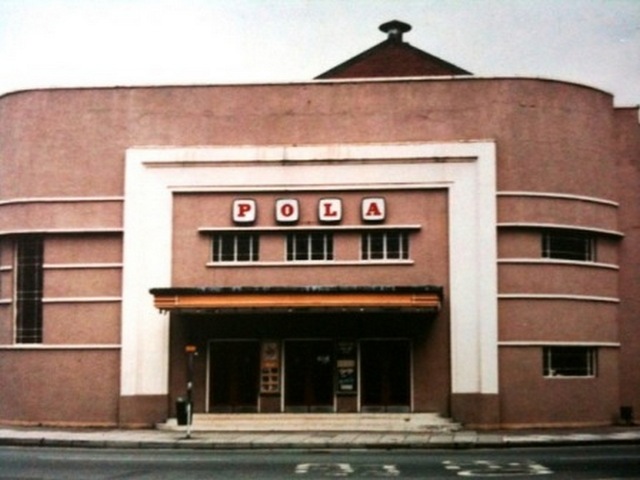 The flagship cinema of the Paramount Picture Theatres (North Wales) Circuit. The circuit Head Office was housed in the former Clive Picture House just down the road.

The Pola Cinema was opened on 18th April 1938 with George Arlis in his last film role “Dr. Syn”. The total seating capacity was 780 seats, with 500 is the stalls and 280 in the stadium style "balcony" to the rear. There was a stage and dressing rooms.

The theatre (in common with the rest of the circuit) survived on split weeks of second run programmes for much of the time. The Pola Cinema staged an annual professional pantomime and there were variety shows and wrestling matches. Bingo ran one night a week on Fridays from the mid-1960’s.

When circuit boss Guy Baker died in 1983 all of the theatres closed. The Pola Cinema was re-opened as a cinema/nightclub about 18 months later. The reduced capacity cinema used seating in the balcony area and was run by former circuit engineer Charlie Thacker until his death in 2006. Charlie’s son took over the management of the theatre and an additional auditorium has opened in the building.

I’d love to know where they put the 800 Ken – both the Pola and its sister cinema the Regent in Newtown seated 560 in tightly packed rows – I worked at both and I’m certain that the formation hadn’t changed since opening… in fact very little changed at any of the Paramount theatres until after Guy B’s death. Times were lean and seats were recovered using unmatched reclaimed cloth (the effect was like a giant unplanned patchwork)– the original seats were in their original places right up to 1983.

The CLIVE Cinema was NOT demolished but still stands in Church street, now converted into flats with a motor vehicle reapir shop where the old foyer used to be. A Plaque commemorates its history as the old Red Lion flannel mill and Clive Cinema, attached to the former front. I visited it and photographed it on the 10th June this year (2009)
Also, was Ian Belion at the Regent Newtown prior or after the installation of Cinemascope? This reduced the seating of both the Pola and the Regent to 624 and 564 seats respectively from the 800 as originally built. Lines of sight Ian.

Good to hear that The Clive still stands – I had been told that it had been flattened but haven’t visited the area for some time.
I worked at the Regent in the late 60s/early 70s – so post Scope – but went to the theatre as a punter for some years before that. Scope installation would have made no difference to the lines of sight. The prosc was ideally proportioned to take the new format and the auditorium was parallel sided – so no seat would have had a restricted view. The scope screen frame was positioned immediately behind the main tabs – the fixings for the original academy frame were visible futher upstage. The front row of the stalls was about 3 feet from the original fixed orchestra pit and the back row was right against the back wall. Seating ran from side wall to side wall with two gangways. The circle seating was also wall to wall with a single centre aisle and on a fixed stepped structure. The only way the capacity could have been originally 800 would be if the space between rows in the stalls had been smaller – which would have made things very uncomfortable to say the least… but that’s not to say that it might not have been done!

The Pola must have been the ONLY cinema in the U.K. not to have its seating reduced when cinemascope was introduced the!

The Palladium Pwllheli also did not have to have it’s seating reduced.

Seating Reduction… Most of the Built Odeons.. Cliftons did not need to reduce.. and I cannot think of any of our 16 Cinemas that did it…

I have passed the Theatre To-day.. It seems it has now closed.. The Digital Age has killed it Off…

First closed 1 October 1983 but reopened 14 October 1983, conversion in 1986 for disco downstairs and cinema upstairs with 210 seats. Closed again 1989, reopened May 1992 with cinema now on 150 seats and Park Diner, resembling a Victorian park, downstairs. Twinned 1994. Closed 13 June 2103 with “Fast & Furious 6” and “The Big Wedding” as to costly to make transition from 35mm to digital. Now Great Escape Fitness & Spa with a beauty section downstairs.