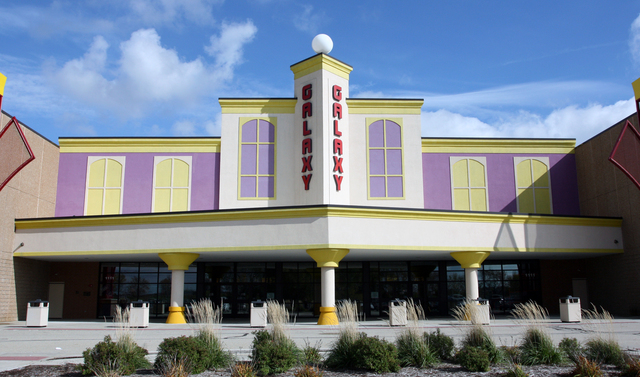 This brand-new megaplex opened on Bloomington’s west side on January 31, 2008, and was designed by Rataj Krueger Architects, Inc. It has fourteen screens, including the "mega-screen". It is a 64' by 32' screen, the largest in central Illinois. All auditoriums have the Dynamic Dolby Digital Sound. The mega-screen theater is also equipped with digital 3-D capabilities.

The Galaxy 14 also features Fred’s Drive-In. This is the main food counter in the lobby. The food selection has your basic movie fare - popcorn drinks and candy - as well a large variety of hot food and ice cream.

The lobby has a large eating area with a giant movie screen that shows previews to upcoming movies. There is also a number of video games on the opposite side of the lobby from the seated eating area.

The auditoriums themselves all have stadium seating. The stadium seats include all of the seats - not just the seats behind the front aisle. There is a large open space in front of the screen which ensures the patrons who have to sit in the front that they will not have to look straight up in order to see the screen.

Following the movie, ushers greet patrons at the theater door to hand out free mints.

Overall, this is a very nice addition to the Bloomington-Normal area. Hopefully people who are hesitant to drive out to the west side of Bloomington will give this place a chance.