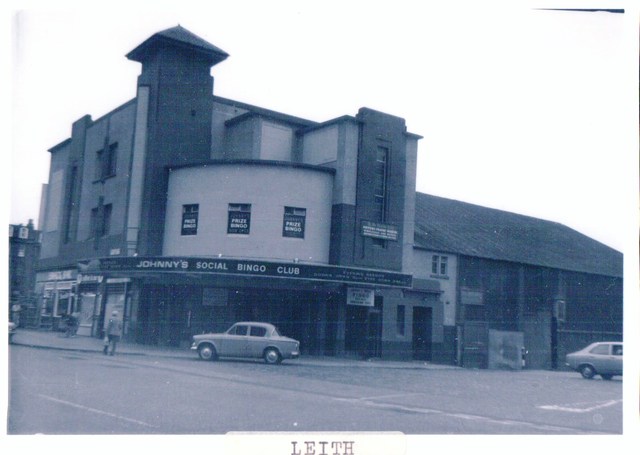 Located in the Leith district of Edinburgh, the State Cinema opened on 19th December 1938 with Madeleine Carroll in "Blockade" and Gene Autry in "Boots and Saddles". It was a luxury super-cinema, designed in a streamline Moderne style by architect Sir James Miller. It was built by the independent operators Miller, Albin and McLaughlin group. The building also contained four shops, two billiard saloons and a skittle alley. Located on a prominant corner site, the sweeping curved entrance had a tower feature on the left hand side which was topped by a pagoda roof.

Inside the auditorium the lighting system was by Holophane, which played various colours onto the walls and ceiling. Seating was provided in stalls and circle levels and the proscenium was 48 feet wide.

The State Cinema closed on 11th May 1972 with Richard Burton in "Where Eagles Dare". It was converted into a bingo club, latterly a Mecca Bingo Club. When this closed it was expensively converted in the Babylon Nightclub, but this later closed and the building became the Kingdom Church. In February 2005 plans were proposed to demolish the auditorium and retain the facade and foyer as an entrance to a new block of flats on the site. The snooker clubs continue to operate within the building. By May 2018, the church and snooker club had moved out and the planned demolition of the auditorium was imminent. In May 2019, plans were approved to demolish the auditorium to build a block of flats on the site, and retain the Art Deco style Facade.

Part of the building now occupied by the Kingdom Church. Owner of site believed to be Irene diRollo.

The State will be used to host an event as part of the Hidden Door Festival at the end of May.