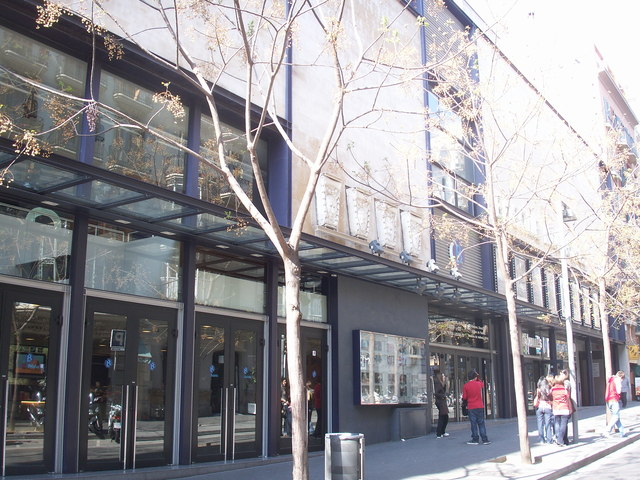 Located north-west of the city centre at the corner of Rambla de Prat and Princep d'Asturies. The El Gran Teatro del Bosque opened on 19th March 1905 and was first used as an opera house with a performance of the opera “Marina”. It had a seating capacity of 1,000. It was re-built and re-opened on 21st June 1917 as a 1,800 seat theatre. From 4th September 1926 it became a full-time cinema, known as Cine Bosque. During the 1930’s it was used for film and variety shows. The Cine Bosque was re-furbished in September 1944.

In 1965 the façade was modernised and the interior was also given a modern treatment by interior designed Antoni Bonamusa, with drapes on the walls of the auditorium and had a new seating capacity of 1,065, closing off the balconies with a drop ceiling. The opening film in the re-furbished auditorium was Cantinflas in “EL Padrecito”(“The Little Priest”). One of the big hits to play the Cine Bosque was “Earthquake” starring Charlton Heston and presented in ‘Sensurround’, opening on 4th April 1975.

In 1997-99 the main auditorium and stage end of the building were demolished. Today the Bosque Multicines is a modern multiplex theatre made from a new building containing four screens, and retaining the façade of the old Cine Bosque, although it only serves as a supermarket on the ground floor where the original foyer was located. The four new screens have been added to the site with seating capacities of 251, 182, 173 and 298.

The original Cine Bosque site has now one screen where the old cinema auditorium (former stalls area) stood, with seating for 500, two screens in an area where the former mezzanine was located, seating 112 and 171, and two screens in the "scenario" (former stage area) seating 140 and 178.

Architects for the renovation/new building are Enric and Robert Mir. Interior decorations were carried out by Antoni Bonamusa.

Great pictures. I lived in the street behind this cinema for 5 years so I know the finishing times by heart. Quite modern and comfortable. Usually where I would go to check out spanish movies like Sleep Tight, The Skin I Live In and The Orphanage. They have gone back to projecting Opera in digital since 2011.