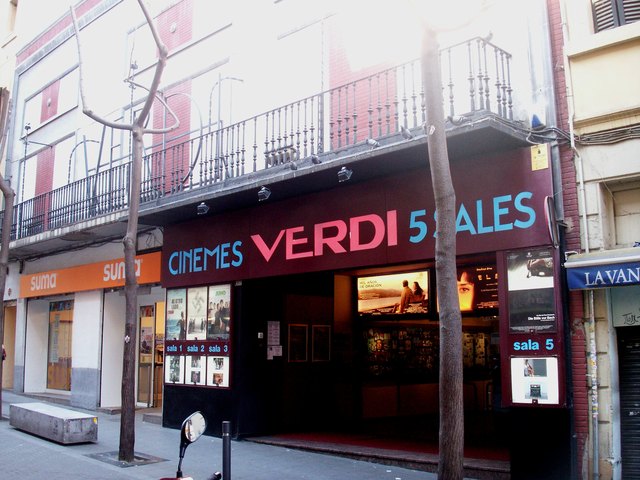 Located a little out to the west of the city centre in the artsy Gracia district. The Cine Verdi opened in 1933/34. It had an original seating capacity of 1,120. Closed during the Spanish Civil War, it re-opened on 20th December 1944 with Barbara Stanwyck and Joel McCrea in "The Great Man’s Lady" and Boris Karloff and Basil Rathbone in "Tower of London". On 3rd March 1945, a ballroom located over the entrance foyer was opened, which was named the Grand Salon Verdi.

In October 1963, the cinema was re-equipped with new projectors, new seats and a new ‘gigantic’ Perlux screen. The refurbished cinema opened with the documentary film "Mondo de Noche"("World at Night").

The cinema was completely re-furbished and re-opened on 7th February 1986 with Peter Sellers in "Dr Strangelove, or How I Learned to Stop Worrying and Love the Bomb".

The Cinema Verdi was converted into a triple screen cinema just over a year later. Re-opening on 23rd October 1987 with a total seating of 744. There were 434 seats in the former stalls and two screens in the former balcony which seated 168 and 162.

My local cinema for the past 7 years. Hands down offering the most interesting programming in town. Actually totalling 9 screens, if combined with Verdi Park HD which has an entrance in the next street behind Calle Verdi.

Verdi Park in Calle Torrijos has a bright and modern exterior, and also offers animation matinees for kids on Saturday and Sundays. And you still get the occasional short before your movie at certain showings.