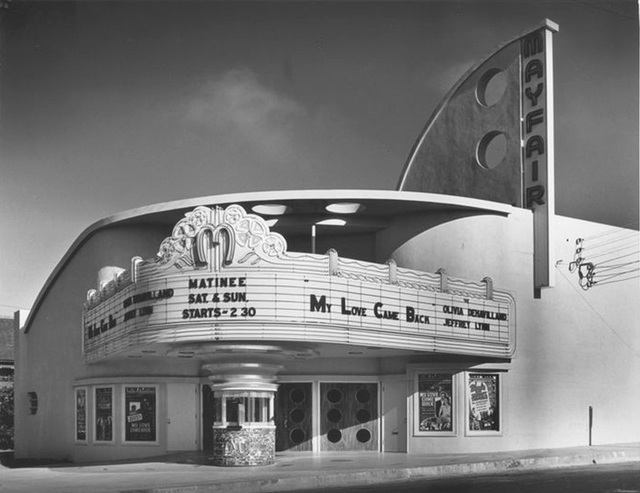 The Mayfair Theatre was opened on June 18, 1940 with Anna Neagle in “Irene”. It had all seating on a single sloping floor. There were decorative mural on the splay walls beside the proscenium which contained murals by interior decorator Anthony B. Heinsbergen.

By 1976 it was a Pussycat Theatre screening adult movies and had closed by June 2003. The theatre was demolished in August, 2004.

This is the old Mayfair marquee, right? I found it sitting in an empty lot a few blocks south of the San Buenaventura Mission. Or at least that’s where it was in October ‘07 when I took these.

mission theater was locaded accrose& down a couple of buildinge from mision. Buliding was still there 5 yrs ago. painted white. it was a low cost theater,b western,oliver and hardy type pictire. i went there from 1946 to 1954. theater was not new in 1946

billy byron: I missed your comment earlier, as my e-mail service no longer sends me notifications for new Cinema Treasures comments.

If you get back to this page, could you please click on this link to a 1951 Life Magazine photo and tell me if the theater the photo depicts is the Mission? The Life Magazine archive says the building is in Los Angeles, but I think it must be in Ventura, or at least in Ventura County. If it isn’t the Mission, do you recognize the theater at all?

After less than two months as a revival house, the Mayfair Theater has once again shut down. Formerly owned by the Pussycat theater chain and operated as an X-rated movie house, and more recently home to Spanish-language films, the Ventura theater found little success showing cult, art and classic films beginning in November.

“The people who were in there last just weren’t making any money, so they closed it up,” said Ethel Edwards of Walnut Properties, the Los Angeles company that owns and leases the property at 793 E. Santa Clara St. “We’re now trying to lease it out as either a Spanish house or a regular-run house. It’s either for lease or for sale.”

The theater actually had a pretty productive life before being purchased by the Pussycat chain. In the 1950s and ‘60s the building was leased by the family of Ventura resident Trudy Clark. “That was long before the drive-ins and the proliferation of theaters. There were only the two theaters in downtown Ventura … in all of Ventura,” Clark said. “The Mayfair was a regular first-run theater.”

Clark isn’t surprised that the Mayfair failed as a revival theater and questions its future as a movie house. “I didn’t see how it could do very well. You can see old movies on television … regular television, not even cable,” she said. “The theater is a single-screen theater and all the theaters that have been built in the last 15 years are multiple screen. And I don’t see how there would be room to expand.”

The restored Mayfair marquee is pictured in the below article at it’s new home. I will add it to the Photos Section as well if possible, in case the link expires down the road.