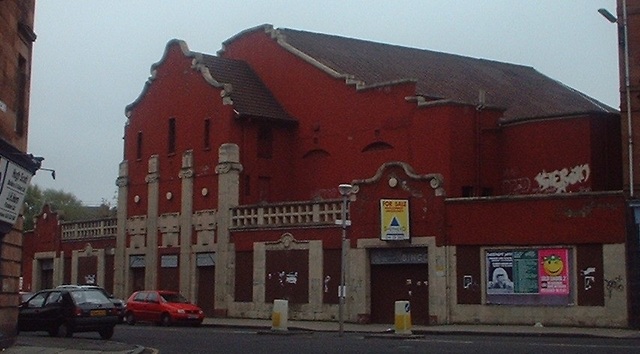 Located in the Cathcart district on the south side of Glasgow, the Kingsway Cinema opened on 8th May 1929. It was built for and operated by the independent Kingsway Cinema Ltd. Designed by noted architect James McKissack in what was described as a Spanish-American style, it had many Spanish style features. Inside the auditorium, seating was provided in stalls and circle levels.

On 7th January 1950 it was sold to George Singleton Cinemas Ltd. chain and was re-named Vogue Cinema, a name he gave to all the cinemas in Glasgow that were operated by Singleton’s. The Vogue Cinema closed in March 1965. It was converted into an independent bingo club which closed in June 1986.

The building then became ever more derelict and was put on the Buildings At Risk Register. On 16th March 1993, Historic Scotland designated the Vogue a Grade B Listed building. Plans were proposed to demolish the auditorium and build flats on the site, but these were amended to total demolition when it was stated the facade was not safe. After many protests and despite the Grade B Listed status, the Vogue was demolished in August 2006.

The sorry saga of our attempts to save this building documented here, with several galleries showing the ruined interior just prior to demolition: