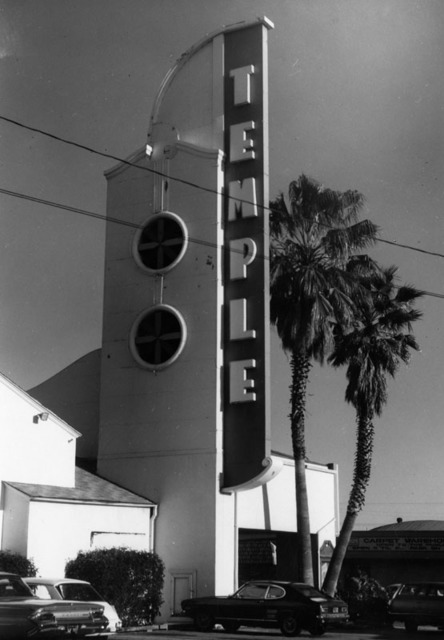 I remember the old Temple Theatre (Las Tunas and Rosemead) very well. I grew up in TC, and all the neighborhood kids would get together and go to the kiddie matinees they had. I saw “Love Bug” and “Incredible Mr. Limpet” there.

This message is for mattepntr. If you remember the kiddie matinees, then you might remember my father you was the manager. He used to get the Temple City businesses to donate prizes and gifts for intermission drawings. No child dared throw their ticket stub away as that is what was used for the drawings. Great old theater. Great memories!

This Temple theater was one door east of Rosemead Boulevard, on the north side of Las Tunas Drive. It was built for the Edwards circuit, and was designed by Lee in a style similar to that he used for Edwards' Tumbleweed Theater at Five Points in nearby El Monte the year before. The Temple was a bit smaller, but both theaters featured two-aisle auditoriums with open beamed ceilings, and, in lieu of the usual walled entrance foyer, had roofed, open sided walkways leading from the box office to the lobby entrance. These unusual entryways featured low wooden fences, rather like farm fences, painted white. In addition, the Temple, whose auditorium ran parallel to Las Tunas Drive, had a covered walkway along its street side, which was set back some fifty feet. This walk gave access to and from the parking lot located to the east of the building.

When this building was demolished, sometime about 1980, it was replaced by a four-screen theater, also owned by Edwards until quite recently.

Manwithnoname: The only theater on the south side of Las Tunas Drive was Edwards San Gabriel, renamed Edwards Century in the early 1960’s. It was located between Del Mar Avenue and San Marino Avenue in San Gabriel. I made a comment on it here:
/theaters/5540/

I love the LA Library’s picture of the ol' Temple Theatre sign up above. Also, Edwards Century was replaced with a one-story medical office building [as San Gabriel Valley Medical Center is nearby].

The Temple Theatre [NE corner of Rosemead & Las Tunas] was built in 1940 for the Edwards circuit, and was designed by famed architect S. Charles Lee. This one-screen gem served many Temple City residents well. Unfortunately, this landmark was demolished and replaced with the NEW four-screen Edwards Temple Cinema in 1983.

UPDATE: Regency Temple City Cinemas has been told by its property’s owner/developer to vacate. The last screening is on January 2, 2006.

A great resource to view pictures of both theaters, including the demolition picture of Temple Theatre, is the Temple City Museum, run by the Historical Society of Temple City [non-profit]. (626) 279-1784

Throughout its entire 43 year history, this theatre was operated by the Edwards Theatre Circuit or its successor, Edwards Cinemas.

With regard to the comments above by JustOldBob (AKA kleig light), the “original” Temple Theatre to which he refers is the theatre in Alhambra which is posted at Cinema Treasures under its final name, El Rey. It’s actual address was 333 W. Main Street. It was never converted to retail use, but remained a theatre from its opening in 1921 until the day it was irreparably damaged by the Whittier Narrows earthquake in 1987.

I’ve tried to figure out what building in the 600 block of west Main Street Bob could have seen that he mistook for this theatre. It might have been the old bowling alley, which was converted into some sort of auto repair facility in the late 1960’s. Later, a fine 1920’s Spanish Revival style garage building next door to the east was added to the auto repair operation, and (an act of vandalism) covered in the same rough, gray facing that had been placed on the former bowling alley. That might be the expansion to which Bob referred.

However, I’m wondering about the “Temple” name plate Bob saw above the door after the building was damaged by the Northridge earthquake. The Temple/El Rey was gone by then,having been destroyed after the Whittier Narrows earthquake, but I can attest that the Temple/El Rey did have such a name plate, as I saw it in the early 1960’s when Edwards remodeled the theatre’s facade, and the plate was exposed when the old marquee was removed. Perhaps it was re-exposed again after the Whittier Narrows earthquake, and Bob just misremembered which earthquake it was that damaged the building, and the building’s exact location.

Or, maybe there is another building with a Temple name plate, which Bob saw in the 600 block of Main Street, and maybe it was a theatre at one time, before the Temple/El Rey was built. The building which had been a bowling alley had a streamline moderne facade, probably form the 1930’s or 1940’s, but that could have been the result of a remodeling of an older building. It’s an interesting puzzle. If I were still in the area, I’d like to root around in the material at the Alhambra Historical Society and see what I could turn up about it.

Yay, the Temple Theatre page has returned from its long sojourn in Alhambra. Now maybe people from Temple City will be able to find it and the page will become active again.

As for the style of the Temple, it was an odd combination of Moderne (used primarily in the name tower) and the simplified Colonial style that was popular for a while in the 1930s and 1940s, but which was used mostly for residential buildings, churches, and small commercial and office structures.

The Temple’s auditorium featured a wood-beamed, king post truss roof, which I’ve never seen in any other theater. In fact I don’t know of any other theater quite like it in style, though it had some resemblance to Edwards' Tumbleweed Theatre in El Monte, also designed by Lee- but the Tumbleweed was far more rustic.

I saw “The Goodbye Girl” and “The Buddy Holly Story” at the Temple Theatre!