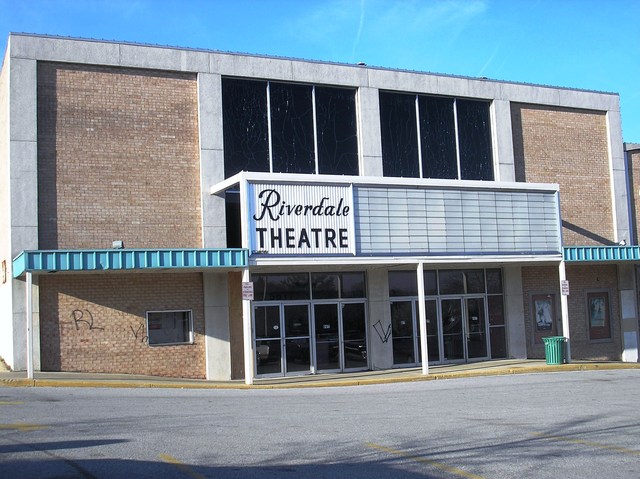 In late-1982, the Riverdale was acquired by P & G Theaters. In August 1985, this theater became the first 99-cent theater in the area. In the spring of 1993, it was twinned. The movie theatre closed with “Kingdom Come” (2001) as the last movie presented in the auditorium on the left. As of April 2008, the building is vacant.

This theatre has not operated since May 2001. The â€œKingdomâ€ on the inside marquee is short for Kingdom Come staring Jada Pinkett Smith which opened in April that year. The Joe Dirt poster on the left wall was an April release picture that year as well.

When this was a single screen theater, I believe I saw Raiders of the Lost Ark and Indiana Jones and the Temple of Doom as a double feature (late ‘84) either here or at the now closed Carrollton (not the AMC Carrollton 6). The theater was huge, of course, but don’t recall if it had stereo of any sort. Sightlines were good as the seating arrangement was somewhat raked.

As I sometimes drive through Riverdale Rd to go home, I still see the place sitting high at the top of the shopping center there. As Jack’s pictures show, it looks like its ready to show movies anytime someone opens the doors.

Tom Laughlin selected this theater for a test screening of “The Trial Of Billy Jack” in 1974, and the crowds were huge.

I use to go to this movie theater long time ago back in the day when I was 1 yrs old I was with my mother my father & my older brother at the time back then they would only cost 1$ to see a movie wish they was still around and never went out business been going to movie theater for a long time as I’ve been around.

Does anyone know who currently owns this building?