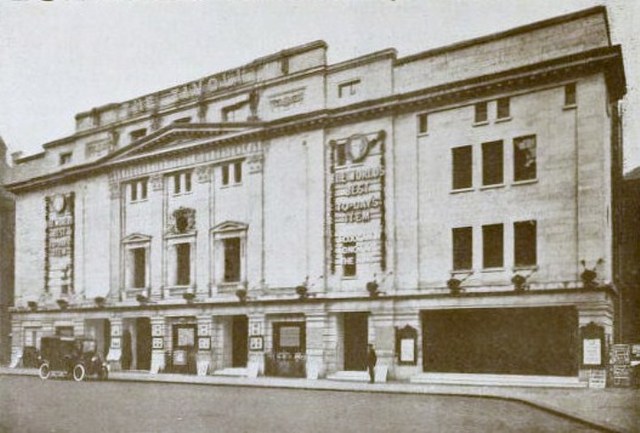 Originally on this site was built the Tivoli Theatre of Varieties, which became a famous music hall. It opened on 24th May 1890 with 1,500 seats and was designed by architect Walter Emden in an Oriental style. In 1891 architect Frank Matcham was brought in to re-design the building and the front-of-house facilities, and the seating capacity was increased to 1,900. Walter Emden returned to the building in 1910 and carried out further alterations, this time in a Louis XIV style with decorations by J.M. Boekbinder. The Tivoli Theatre closed on 7th February 1914 for a road widening scheme, but due to the outbreak of World War I this didn’t happen immediately, and the theatre stood derelict until it was demolished in 1916.

Several years after the end of the war, the Strand road widening had been completed and the site became available to build a cinema. Theatre architect Bertie Crewe and the architectural firm Gunton & Gunton designed the new Tivoli Theatre. It opened on 6th September 1923 with music hall artiste Little Tich and others appearing on the stage, before the main feature film Ramon Novarro in "Where the Pavement Ends". A deal had been done with Loew’s Inc., for the Tivoli Theatre to present exclusive runs of MGM films concurrent with their American release.

The exterior of the building was imposing, but quite plain, and was treated in white Portland stone. Inside the auditorium, the seating was provided for 906 in the stalls, 637 in the circle and 572 in the balcony. There was a large box on each side of the proscenium, but these were decorative. There was a frieze across the top of the proscenium which was decorated with playful cupids. The ceiling had a large dome, which could be opened up in hot weather, and the projection box was at the rear of the dome. A Jardine orchestral organ was installed and another facility was the Dutch Buffet beneath the entrance foyer.

The Tivoli Theatre became the first London cinema to screen proper sound films when in 1925 DeForrest Phonofilm shorts were screened. Also in 1925, it was taken over by MGM/Loew’s and became their showcase theatre. Ramon Novarro in "Ben Hur" was a big hit at the Tivoli Theatre, showing twice daily, it attracted audiences of 1,200,000 during its showcase premiere run in 1926.

When MGM/Loew’s opened their new Empire Theatre, Leicester Square in November 1928, the Tivoli Theatre became surplus to their needs and it was sold to Provincial Cinematograph Cinemas(PCT) who soon became part of the Gaumont British Theatre Ltd. PCT already operated the New Gallery Cinema, Regent Street and the Tivoli Theatre was closed for two weeks for alterations, which included the installation of a WurliTzer 2Manual/9Rank organ.

The Tivoli Theatre had a premier run of Goldwyn’s first talkie, Ronald Colman in "Bulldog Drummond", which was a huge hit in August 1929. This was followed by Eddie Cantor in "Whoopee! and a re-run of "Ben Hur" with sound effects in June 1931.

As newer cinemas opened around the Leicester Square area, the Tivoli Theatre gradually lost ground to screening first run films and closed on 25th June 1938. It re-opened in August 1938 as a second-run weekly change house.

Closed ‘indefinately’ from 30th September 1939 due to the beginning of World War II, it suffered severe bomb damage in 1941, and its basements were used as an air raid shelter. It was repaired and reopened on 22nd February 1943 with a premiere run of Tommy Handley in "It’s That Man Again". First run films then continued, sometimes playing concurrent with the New Gallery Cinema on Regent Street. From the early-1950’s it was linked with the Astoria Theatre, Charing Cross Road, playing pre-release ABC release films.

The Tivoli Theatre was closed by the Rank Organisation on 29th September 1956 with John Mills in "The Baby and the Battleship" and Peggie Castle in "Oklahoma Woman".

It had been sold to Montague Burton, and was demolished. A Peter Robinson department store was built on the site, this was later converted into New South Wales House for the Australian Government. During the late-1960’s a plaque was installed in the foyer commemorating appearences by famed music hall star Marie Lloyd at the old Tivoli Theatre of Varieties which had once stood on the site. In the late-1990’s, New South Wales House was demolished and a new office block was built on the site, which is directly opposite the Adelphi Theatre.

A photograph of the Tivoli Theatre of Varieties, also one of the ‘new’ Tivoli Theatre and other memorabilia from over the years:
http://www.arthurlloyd.co.uk/Tivoli.html

A vintage photograph of the Tivoli Theatre in 1946:
View link

The Tivoli Theatre can be seen on the right of this photograph of the Strand in August 1955, with the still existing Adelphi Theatre across the road and the Vaudeville Theatre in the distance:
http://www.flickr.com/photos/allhails/2784209086/

I was watching “The Strange Case Of Blondie”.This was one of the Scotland yard series made at Merton park,This film was made in 1954.A police car was traili8ng a suspect along the Strand.for a few seconds she is shown walking along the outside of The Tivoli.Of interest as there seem to be little photos available of this building.although i went to most of the West End cinemas.this is one that i never went to it,probably because it closed in 1956.