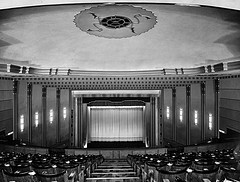 It was taken over by Associated British Cinemas(ABC) in February 1936 and was re-named Savoy Cinema, which it retained until 1961, when it became the ABC Savoy (to distinguish it from the ABC Capitol in the town).

It was tripled with 494 seats in the former circle, and 284 and 179 in the former rear stalls, and re-opened on 14th December 1978. As the ABC Capitol had just closed, it became the ABC. It eventually became part of the Cannon Group and it was re-named Cannon. It closed on 15th September 1993, and has since been demolished.

An artists impression of the Savoy Cinema, from the architect George E. Tonge in 1935:
View link