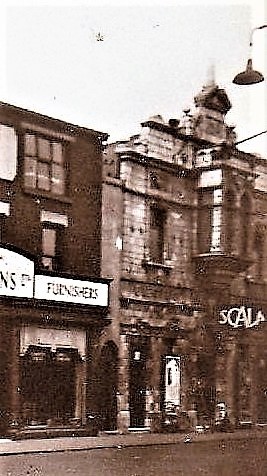 Located in the Lancashire town of St. Helens. The Griffin family operated a furnishing store and photographers at numbers 31 & 33 Ormskirk Street, and in 1912 they built their Electric Theatre at number 35.

In 1928 it was taken over by the Bootle based George Prince Circuit and was re-named Scala Cinema. It was soon equipped with a British Talking Pictures(BTP) sound system. The Scala Cinema was closed in 1956.

The building has since been demolished, and today an Iceland supermarket operates from the site. The Scala name has been retained for the Scala Snooker Club which operates on the first floor of the building.