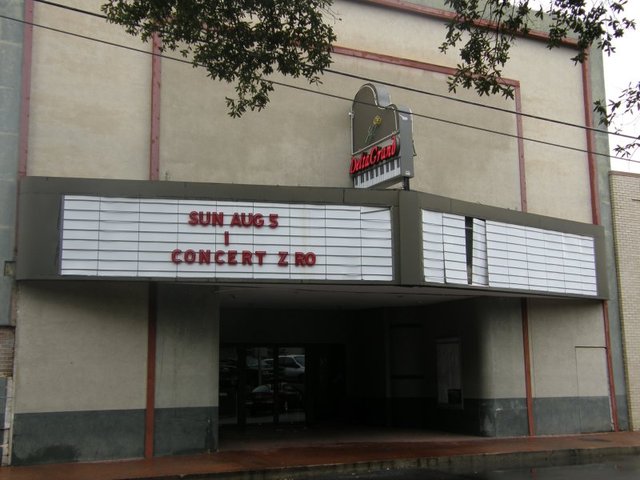 The Conrad Theatre was opened on April 1, 1933. In 1934 it was renamed Delta Theatre. In 1986 the Delta Theatre sat closed but looked to be in good condition. It had a dark brown vertical sign with "Delta" in dark red letters. The bottom of the sign was the point of a neon trimmed marquee that reached across the width of the building and sheltered a recessed entrance. There were the familiar outside movie poster frames, two on each side of the entrance.

By early-2010, it was back in use, but this time as one of the venues used by the Opelousas Little Theatre as a live theatre/performance space. Now renamed Delta Grand Theatre.

A 1986 photo of the Delta Theater in Opelousas.

The theater has been renovated recently. It no longer has fixed seating. The renovation geared it towards stage productions and plays.

I’ve been unable to discover how old the Delta Theatre is, but it was altered and received a new front around 1938-1939, according to the records of the architects for the project, the Lake Charles, Louisiana, firm Dunn & Quinn. The house was then being operated by the Southern Amusement company.

Perhaps not, Stephen. A Delta Theatre at Opelousas was mentioned in the January 28, 1936, issue of The Film Daily. The January 7 issue mentioned a Harold Bailey as a recent visitor to film row in New Orleans. Though it didn’t give the name of his theater, I think we can guess what it was.

The Princess Theatre was mentioned in the January 6, 1917, issue of Motography, which said it was the only theater in Opelousas at that time, though in 1911 The Moving Picture World had mentioned a house called the Bon Ami Theatre there.

A house called the Rex Theatre was in operation at Opelousas in 1941 and 1951, the years in which alterations were planned for it by architect John M. Gabriel according to this partial list of his works. The Rex was a Southern Amusement Company house. Interestingly, Gabriel also designed alterations for the Delta Theatre a couple of times. He is already credited by Cinema Treasures with two theaters.

The Opelousas Little Theatre web site makes no mention of the Delta Theatre. In fact the house, now called the Delta Grand Theatre, has its own web site. The correct address is 120 S. Market Street.

The web site includes a brief history section with an ad published at the time of the Delta’s reopening as a CinemaScope house in 1955. The ad says that the Delta originally opened on April 1, 1934.

All very interesting, looking back, I spent a lot of time in the Delta movie house, or as we said, ‘the picture show’……..many fond memories…..glad to know that it is being used well today……

I have uploaded a picture of a page from the Opelousas Daily World from August 31, 1950 in which an ad for the Delta and other theatres operating in Opelousas at that appear.

This article from the Opelousas Daily World of September 19, 2019 says that the Delta Grand Theatre opened on April 1, 1933 as the Conrad Theatre. It was renamed Delta Theatre in 1934.

I think they should have retained the blade sign, but fantastic the building is being used for something theatre oriented.