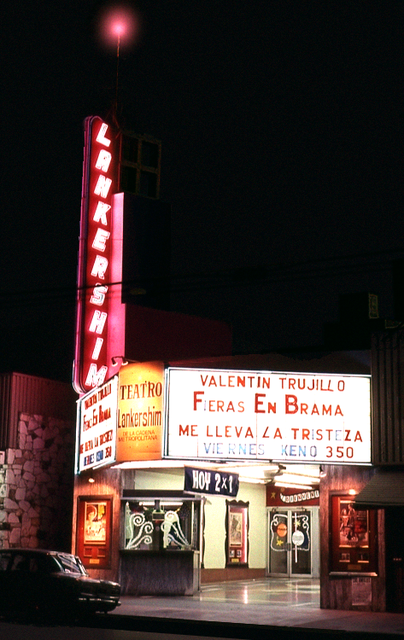 The Lankershim Theatre opened on February 13, 1947. It was taken over by Metropolitan Theatres on August 6, 1977 screening Spanish language movies. It is now operating as a church.

I was born in Van Nuys in 1946. My lovely wife of 35 years and I have lived in North Hollywood since ‘69. We have been active participating members of the local live theater community for over 30 years (Anteus Company??). We only have to walk 2 minutes to the Redline Subway for a seamless 3 minute trip to Universal, a 10 minute trip to the movies in Hollywood and concerts at the Bowl and the Ford Theater (Pilgrimage Theater??), or a 20 minute trip to the Wiltern. I don’t doubt that there will be some form of film theater built in the new development currently ongoing around the North Hollywood subway platform. What goes around comes around…
.

I would get upset when the union would call me to run a movie somewhere on my day off and even more upset when it was on a holiday. Back in 78, I got the call on the forth of July to do a double shift at the Lankershim because the regular operator could not make it. At that time, it was running Spanish movies. This really ticked me off. My American holiday was completely ruined. So, to celebrate in my own way, I lite an M-80 and tossed it on the box office roof. After it blew the roof into splinters, I thought I would die laughing, but nobody else saw the humor in this. Geezzz… People, lighten-up. It’s a holiday.

I stopped by the Lankershim yesterday. It still looks pretty much like the photo above. From up close you can see that all the neon under the marquee has been broken, and everything is run down. It looks like they prepare food or something in the entranceway. There was a sink installed there.

We went inside. There’s a stall set up in the lobby to sell religious videos and whatnot. The small auditorium is pretty much intact, painted white. I would guess that it holds a few hundred seats — maybe around 500. They had built a platform in the middle of the seats to hold a video camera, and there was a small screen masked off by black scrims within the proscenium.

We spoke briefly to someone who worked there, but he said there was a “prayer session” going on (there was no one visible in the auditorium or lobby) and asked us to return in an hour. But we had other theaters to visit, and didn’t go back.

Here is part of an April 1977 article from the Van Nuys Valley News:

Several hundred picketers protested in front of Lankershim Theater in North Hollywood Friday over the X-rated films shown there. The demonstration was organized by a group calling itself Citizens for Decency, and included parents, teenagers and children. Claudia Clark, one of the leaders of the demonstration, said the group was upset because the theater formerly showed family films until it was purchased by the Pussycat Theater chain in December.

Jim Winters, an aide to Councilman Ernani Bernardi, Seventh District, said the local councilman was “supporting these people in their activity.” Despite the protest demonstration, Mark Edelman, district supervisor for the Pussycat Theaters, said he had “no objections” to the picketers.

Edelman claimed that the theater was losing money by showing the family films before it was bought out. “This theater was operating way in the red but we’ve done quite well” by showing the adult films. He also disputed charges that the X-rated pictures led to an increase in crime and noted that a commission on pornography established by former President Richard Nixon determined that pornography did not have harmful side affects.

Los Angeles police Lt Bernie Conine said that the demonstrators had a right to protest, but also said. “As I understand it. there’s nothing illegal about the theater.”

My family & I moved to No. Hollywood in 1956 and we lived on Sherman Way near Tujunga Ave. I went to Sun Valley Jr. High, graduated from there in 1959. I think that the 50’s in the Valley was a great time and place to grow up in. I spent man

contin…
I spent many Sat. or Sundays at the Lankershim theatre. I remember a lot of mom & pop stores around the building also. I rode my bicycle from Sherman Way to the Lankershim theatre. The movies were fairly new and the building was nice. It’s nice to see some newer photos of that place and that its still there with its marquee in place. Fun to reminisce a earlier time, miss it…

Any idea what year this theatre opened?

Here’s a photo from 2009
The Lankershim- Nothing Dies With Blue Skies.com

This was reopened by Metropolitaan theatres on august 6th, 1977 with Cantinflas in “El Ministro Y Yo”