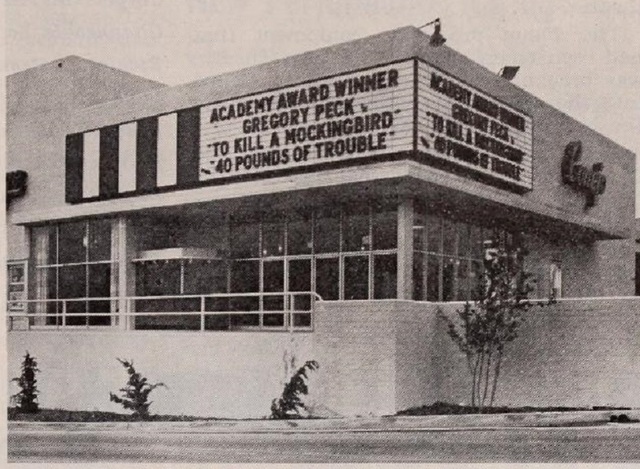 Opened May 23, 1963. Another Fox West Coast Theatre from the early-1960’s like the Fox Palos Verdes, Fox Fallbrook, and Fox Covina. Each of these theaters, including Conejo’s, was twinned in the 1970’s. The Conejo Village 1 & 2 was opened on December 20, 1972. Only the Fox Covina was later triplexed.

After later being part of the National General and Mann circuits, the Fox Conejo Twin Theatre was closed and demolished in 1996.

As a child living in Thousand Oaks in the late 1970s I remember two small theaters I went to. This as opposed to the multiplexes (then only 4 or 5 screens) at the Janss Mall and the newly built Oaks Mall. One of the small theaters, I believe, was called the Janss Theater and was in Thousand Oaks proper on Janss Road. The other was in Newburry Park (possibly on Orchard Road). Was this last one the Fox Conejo Twin Theatre?

Boxoffice says that the Fox Conejo Theatre was in the Conejo Village Shopping Center, but I’ve been unable to track down an address for it. The shopping center’s name has apparently been changed. The theater opened in 1963.

There was a 750-seat Melody Theatre in Thousand Oaks, opened on October 13, 1965. It was mentioned in several issues of Boxoffice. The Melody was originally operated by Jack Grossman’s Holiday Theatres. It was in the Park Oaks Shopping Center, at Moorpark and Janss Road. I think it must be one of the theaters Knatcal remembers.

Here is a December 1973 ad from the LA Times:
http://tinyurl.com/ycuzzkk

The Conejo Village Shopping Center is now known as Janss Marketplace. Its theatre is the Mann 9 – possibly built within the old Fox Conejo Twin? The Janss address is 275 North Moorpark Road East.

The Conejo Twin at the Janss Mall was located where TGIF’s is currently, near the corner of Hillcrest and Moorpark. The current Mann Theatre is on the other side of the mall. I worked at the Melody Theatre in the Park Oaks shopping center from 1993 to 1995. It was my 1st job as a 16 year old and I loved every minute of it. (Except when the film broke!)I not only worked concessions and box office, but also in the projection booth. I was so disappointed when the Melody closed, which was only a few months after the Conejo Twin closed. Such great memories of both theatres.

As a 13-year-old in 1961 when my family moved to Thousand Oaks, I have (admittedly distant) memories of the hoopla when the Fox opened in the then small rural community (party line phones, no stop signs). I recall a special event involving the Fox on Halloween 1961 — don’t remember if it was the theater’s grand opening or just the premiere of a movie, but do I recall that Hayley Mills was appearing there in person. I remember it because it caused an enormous conflict between going trick-or-treating and seeing my teen heartthrob in person.

Update: according to Carol A. Bidwell’s 1989 book “The Conejo Valley: Old and New Frontiers,” the 854-seat Fox Conejo opened in 1963, not 1961, and it was Annette Funicello who attended the opening, not Hayley Mills.

Shows you the accuracy of half-century-old memories! (My only excuse is that as a kid I never was an Annette fan — it was Hayley all the way.)

This opened on May 23rd, 1963. Its grand opening ad can be found in the photo section.