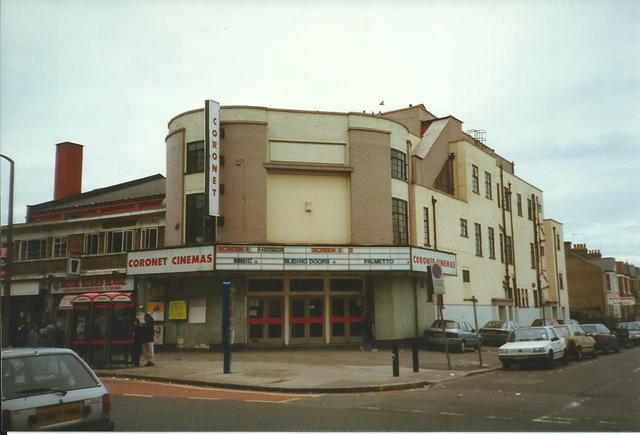 Located in the Borough of Haringey, a district in the north of London to the south of Wood Green. The Ritz Cinema was one of several cinemas (usually named Ritz) that were designed by Major W.J. King. It opened on 30th December 1935 with Clark Gable in “China Seas” and Ricardo Cortez in “Sing Me A Love Song” and was built for and operated by Associated British Cinemas(ABC).

The cinema was part of a scheme included in the new Turnpike Lane tube station and bus station, designed by London Transport’s architect Charles Holden. Seating in the Ritz Cinema was provided for 1,271 in the stalls and 579 in the circle. The Ritz Cinema was equipped with a stage, which was only occassionally used, and a cafe that was located over the entrance foyer, which operated until the 1950’s.

It was re-named ABC from 9th October 1961 and was eqiupped with a Todd-AO size screen and 70mm projection equipment. It was closed on 11th June 1977 for conversion into a triple screen cinema. ABC 1,2,3 opened on 29th September 1977 with 625 seats in the former circle (extended slighty forward) and 417 & 316 seating in the two screen in the former stalls. In 1986 it was renamed Cannon when the Cannon Group took control of ABC/EMI.

The land was owned by London Transport and they needed to demolish the 1930’s bus station and build a new one. The Coronet Cinema was closed on 25th March 1999 with "Patch Adams", "This Year’s Love" and "Urban Legend". It was demolished in August 1999.

A set of 18 vintage photographs of the former Ritz Cinema:
View link