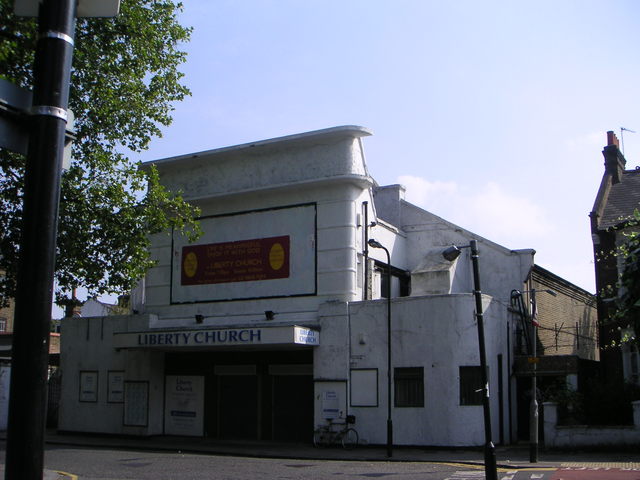 Located in the north London Borough of Haringey at Ducketts Common, Turnpike Lane. The Premier Electric Cinema opened on 16th April 1910 and was designed by William Emden & Stephen Egan of the architectural firm of Emden & Egan. Seating was provided for 900, all on a single floor. The auditorium has a barrel vaulted ceiling with decorative ribs across. In the early 1930’s, the name was shortened to Premier Cinema.

The Premier closed on 22nd January 1938 to allow for modernisation to be carried out. Cinema architect Frank Ernest Bromige designed a new modern Art Deco frontage to the cinema and inside the theatre, the foyer was modernised, a new procenium was added in the auditorium, although the original barrel vaulted ceiling was un-touched. It re-opened as the Regal Cinema on 7th March 1938 with Jack Buchanan in "The Sky’s the Limit". The seating capacity had been reduced to 730.

In 1948 it was taken over by S.M. Super Cinemas Ltd. and they were taken over by the Essoldo circuit in 1954, the Regal being re-named Essoldo. It closed on 10th November 1963 with Anton Diffring in "Circus of Horrors" and was converted into a Vogue Bingo Club. This proved not to be successful and it re-opened as the Curzon Cinema on 15th February 1964 with Norman Wisdom in "A Stitch in Time". By 1980 it was screening double bills of censored sex films, with Indian films showing on a Sunday. It closed in 1989.

It was converted into a Quazar lazer game centre in 1990, and after this fad waned, it was taken over by a church in 1996. The church found the building needing more care and attention than its worshippers and they pulled out within a year. It was then re-opened on 31st October 1997 as the New Curzon Cinema, screening Indian ‘Bollywood’ films on a new huge screen, brought forward of the original proscenium and it was equipped with a new sound system.

On 16th April 2000 the New Curzon Cinema celebrated the building’s 90th birthday with a special screening of the Peter Sellers film "The Smallest Show on Earth". Sadly the New Curzon Cinema couldn’t compete with the new Cineworld multiplex in Wood Green, which also screens Asian ‘Bollywood’ films in several of its screens, and the New Curzon closed in January 2003 when it was converted again to a church, known as the Liberty Church.

Here is a set of 17 vintage photographs of the Premier/Curzon Cinema, Harringay:
View link