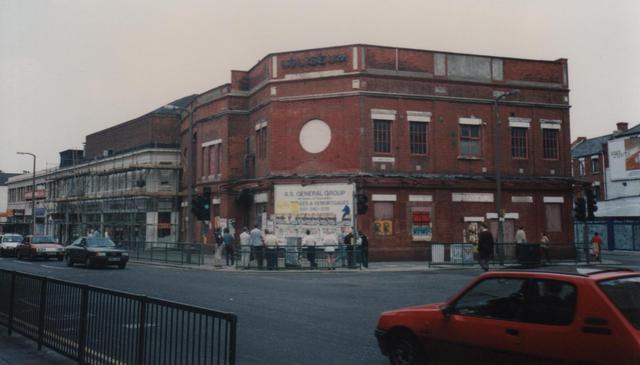 The Electric Coliseum Cinema was built in late-1912, and opened early-1913. Located on Green Lanes/St. Ann’s Road at Salisbury Corner, across from the Salisbury Hotel, in the north London district of Harringay.

Seating was provided in stalls and a small circle. The proscenium was 29 feet wide and there was a small stage for variety acts. It was equipped with a 2Manual 17 stop organ, believed to have been manufactured by T. Jones, which had 3 couplers. It was a straight church type organ, the organ chamber was located to the left of the screen. The Electric Coliseum Cinema also had a dance hall attached, with its own separate entrance.

Operated as an independent cinema through its entire life, it became the Coliseum Picture Palace in the 1920’s and Coliseum Cinema in around 1930 when talkies were introduced and some alterations were made to the interior. At some period of time, the exterior was modified and it lost much of its decorative details.

The Coliseum Cinema closed on 3rd June 1961 with "Tony Curtis in "Who Was That Lady" and Randolph Scott in "Buchanan Rides Alone". It was converted into an independent bingo club.

The bingo club use ended around 1977 and the auditorium became a furniture store. The organ was still in situ, but obviously had not been played since the early 1930’s and had been covered over. The former dancehall with its domed ceiling became a popular gay nightclub known as Bolts. It attracted acts such as The Weather Girls-‘It’s Raining Men’, and regular customers such as George Michael (then part of pop duo ‘Wham’), who lived locally.

The furniture store closed and the cinema section was boarded up. Bolts Nightclub eventually moved out of the danchall and it became a Greek club for a while.

In September 1999, the by then derelict building was sold for re-development and it was demolished in late 2000. Housing was built on the site and the development opened in 2004 as ‘The Coliseum’.

A photograph of the Coliseum Cinema in June 2000, when a fire broke out in the empty building:
View link

The organ from this theater is apparently available:
View link