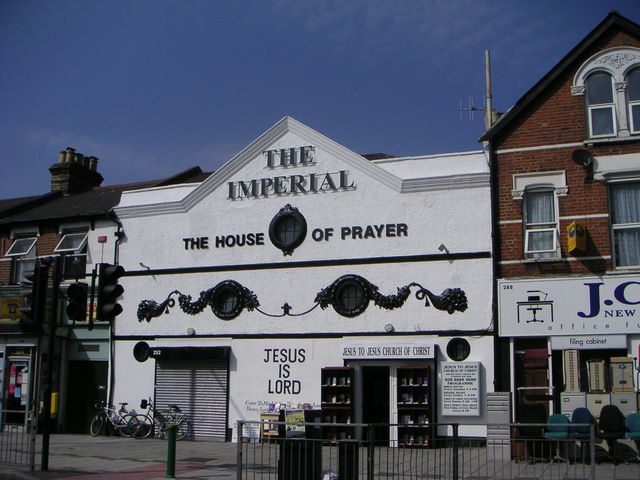 The Imperial Electric Theatre opened on 8th November 1913. The architect was E.A. Thorne and he designed an attractive facade which had decorative features of bunches of grapes in the stonework. There was a tiny foyer and the auditorium had seating on one level with decoration which could be described as minimal.

The Imperial closed soon after the beginning of World War I but re-opened after the war ended and was known as the Imperial Cinema, operated by the Lion Cinematograph Company Ltd. By 1931 it was operated by H. & G. Sado and it had been fitted out with a Western Electric Sound system.

In 1949 it was taken over by the Newcastle-upon-Tyne based Essoldo Circuit cinemas and was re-named Essoldo Cinema. It was fitted with a CinemaScope screen in 1954 but the writing was on the wall for small neighborhood cinemas and it closed on 31st May 1958 with Tyrone Power in “Witness For the Prosecution” and Phillip Friend in “The Betrayal”.

The building had its seating removed and became a carpet store selling ‘surplus end of rolls’. After over 40 years, the carpet store moved out around 2000 and the building sat empty until early-2004 when it was taken over for use as church. The facade has been re-painted and it again has the name ‘Imperial’ attached to it.

By December 2017 the church had moved out of the building and it was being converted into a restaurant.

What about “The Royal” (where the Ritzy club was) & “The Palace” (where the bingo hall now is).